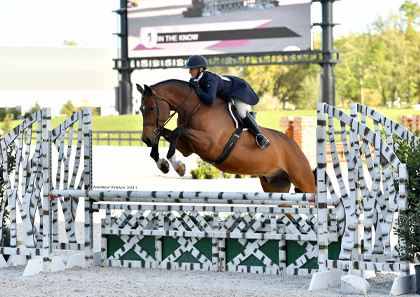 Week 10’s Derby Friday took over the Stadium today as more than 75 entries contested the $20,000 WEC Hunter Derby 3’6″-3’9″, $15,000 WEC Derby 3′ Open and $15,000 WEC Derby 3′ Non Pro. Courses for today’s classes were designed by Scott Alder of Michigan and featured a track of inviting natural obstacles. Handy rounds in each class offered several opportunities for inside turns, allowing entries to show off their own unique style.

This afternoon’s $20,000 WEC Hunter Derby 3’6″-3’9″ saw a field of 16 entries compete for the win over Alder’s course. Scores soared into the high 80s and low 90s, but none could best Samantha Schaefer and Madeline Schaefer’s In The Know (Arkansas x Cavelle), who notched their third victory in the class this circuit. Schaefer and the 11-year-old Warmblood gelding have topped the $20,000 WEC Hunter Derby 3’6″-3’9″ twice this winter, and have also taken 2nd place twice. The unstoppable duo was on fire again this afternoon, navigating a foot-perfect first round with all four high options for a score of 89. Schaefer and In The Know returned last in the handy round, laying down a second flawless course with tidy inside turns to fences 1, 2, 3, 4, 7 and 8. They were rewarded with a score of 91, bringing their two-round total to 180 to top the class, marking their third win in the $20,000 WEC Hunter Derby 3’6″-3’9″.

Timothy Maddrix and Jacob Brupbacher’s Aiden (Cassini II x Clerece) were also impressive this afternoon. The 9-year-old Warmblood gelding has ribboned in the Children’s Hunter with owner Jacob Brupbacher throughout the season and stepped up to the 3’6″ height with Maddrix today. The duo earned scores of 81.5 and 89, totaling 170.5 for 3rd place.

Schaefer stuck around after the awards presentation to chat with us about her win, “In The Know, or Spider in the barn, is my quarterback, I can always count on him. He had last week off, so he was nice and fresh for this week. He’s only been doing these classes and has really enjoyed that plan. He’s a show horse, I just ride him to keep him fit at home. He knows when a class is important and he is the best version of himself in those moments. He’s a special horse, he’s crazy smart and we have a very special partnership.”

She also added, “I really liked the handy course today, there were some turns where I felt like he could really show off a bit. He’s going to take next week off, then come back for Week 12 to hopefully have a shot at the final big derby. I can’t say enough good things about him, he’s truly a family member and the barn mascot. He has even had the same groom for the entire time we’ve owned him, and they are inseparable. He’s a really important horse in my riding and he’s my rock.”

Twenty-six entries filled the Stadium for the $15,000 WEC Derby 3′ Open, but Shadow Ridge Farm of Ocala, Florida stole the show with trainers Samantha Schaefer and Kate Conover claiming the top three spots in the class.

Samantha Schaefer and Ava Berman’s Emilio (Embassy I x Pirouette) nabbed the blue ribbon in the $15,000 WEC Derby 3′ Open. The 9-year-old Hanoverian gelding typically competes in the Children’s Hunters with owner Ava Berman, but Schaefer had the ride on him today. The pair earned the highest score of the first round, finding each fence perfectly in stride and jumping all four high options for a score of 94. They returned for the handy round, flowing seamlessly through tidy inside turns to fences 1, 2, 3, 5, 8 and 9. They were rewarded for their efforts with a second score of 94, totaling 188 for 1st place.

Kate Conover and Take 3 LLC’s Point Blank (Cascari x Hallig VI) earned the red ribbon in the class. Conover and the 10-year-old Holsteiner gelding have consistently earned ribbons in the $15,000 WEC Derby 3′ Open this season and returned today in hopes of another top placing. The pair earned scores of 92 and 92.5, totaling 184.5 for 2nd place.

Schaefer took a moment to chat with us about her win in the class, “It was a good day for Shadow Ridge Farm. Kate and I went to get coffee this morning and I was joking that we should go 1-2-3 in the derby, so that was a success! Emilio belongs to Ava Berman and she rides him in the Children’s Hunters, and her goal is to move up to the 3’3″ Juniors. She purchased Emilio in the fall through Claiborne Bishop from Kim Hopkins. He was a horse that I saw a few years ago competing in the amateur divisions that I really liked. He’s a really fun horse. We did the class today to gear up for the $75,000 WEC Hunter Derby at the end of the circuit and this was his first time in this ring. Overall, I think he performed well.”

She also commented on 2nd and 3rd place, “Point Blank is owned by my mom and my step father, along with the Take 3 LLC group. Kate has been riding him for years, that’s her main man. I thought she put in two really strong rounds today. Sutton Place is owned by my sister, Madeline. She shows him in the amateurs, but she is busy competing with school in NCAA and can’t make it to Florida, so we’ve been using these classes as a way to keep him in the ring. I thought he was great today.”

This afternoon’s $15,000 WEC Derby 3′ Non Pro saw a field of 34 entries vying for the win, but it was Christine Campbell and her own Stallone (Silver Train x Mickey’s Gal) took home the blue ribbon, notching their first-ever hunter derby victory. Campbell and the 8-year-old Thoroughbred gelding earned top placings in the Performance Hunters at the McDonogh Winter Classic in late January, preparing them well for this afternoon’s class. The pair navigated a spectacular first round, choosing all four high options for a score of 85. They returned for the handy round with the same finesse from the first round, opting for inside turns to fences 2 and 9, along with all four high options. The duo earned a handy round score of 86, totaling 171 for the win.

Madison Ryan and Kevin Eufemia’s Maguro also found two fantastic rounds in the top placings in the $15,000 WEC Derby 3′ Non Pro. Ryan and the 10-year-old Holsteiner gelding have earned ribbons in the Junior Hunters throughout the World Equestrian Center – Ocala Winter Spectacular and were well prepared for this afternoon’s derby. The pair earned scores of 82 and 85.5, totaling 167.5 for 2nd place.

Haleigh Landrigan and Ava Berman’s Skorekeeper (Casall) were just behind Ryan and Maguro. The 17-year-old Warmblood gelding has taken ribbons in the $15,000 WEC Derby 3′ Non Pro this season with owner Ava Berman, but Landrigan had the ride today. The dup earned scores of 79 and 88, totaling 167 and sliding into 3rd place.

Campbell took time to chat with us ringside about her special win, “We’ve done a lot of derbies, but this is our first derby win. I was crying hysterically. We usually just shoot for making it back, so to win here was truly a surprise. My horse is perfect. It was a great course, there were a lot of options and a lot of single jumps, and that is where Stallone excels. The wide sweeping turns and the inside options were ideal for him. He went in and picked up a great canter, then held it throughout the course. It was a long course, so rhythm was really important.”

When asked about Stallone, Campbell replied, “He is a Thoroughbred, so it’s not very common to see them winning a derby. I’ve had him for a little over a year and we do everything from the Thoroughbred Hunters, to the derbies to the Amateur Owner Hunters. He’s a really solid horse, I get nervous and he stays steady.”

She also added, “I am a mom of two boys and I’m an attorney in Philadelphia, so I’m actually showing in between conference calls. My barn is at WEC for two weeks and I was able to fly back and forth to show. It takes a village, and I have a very supportive village. They keep him going while I’m not here, so he’s ready to go when I get off of the plane. This isn’t always thought of as a team sport, but I have a real team supporting me.”

Before the start of the handy round in the $15,000 WEC Derby 3′ Non Pro, the prestigious Style of Riding Award was presented to Samantha Ruttura for her classic style and her sportsmanship. The Style of Riding Award is generously donated by Bill Rube to be awarded to the rider who best displays the American Style of riding in the ring and sportsmanship outside of the competition arena. The recipient serves as a role model for preserving the integrity and tradition of equestrian sport. “This award is very special to me because the recipient of this award pays it forward both in and out of the show ring,” says Rube. Ruttura received an elegant leather duffel bag and wore a white rose corsage on her lapel throughout the handy round to signify her achievement.

The Shapley’s Champion Groom Award for the best turnout in the class was presented to the groom of 7th place finisher in the $15,000 WEC Derby 3′ Non Pro, Quoted (Quidam De Revel x Unoria). Shapley’s is a proud sponsor of the World Equestrian Center and is thrilled provide an award each week of the Winter Spectacular to the groom of the best turned out horse. Quoted’s groom received a Shapley’s Award Bucket for the gelding’s stunning turnout.