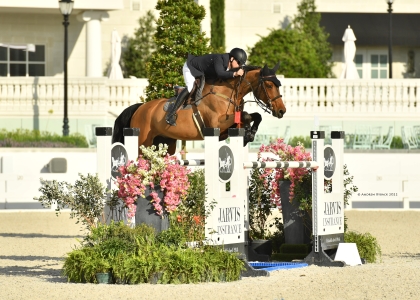 Ocala, FL – National feature competition continued this week with the $30,000 C. Jarvis Insurance Welcome Prix. Thirty contestants battled for the lion’s share of the prize money over the course designed by Tucker Williams (USA), but it was Santiago Lambre and his own Cetano Van Aspergem Z (Clinton x Altamira Z) that secured the victory, besting ten other top pairings.

Of the ten pairings that managed a clean effort in the first round, five were able to land double clear. Lambre (BRA) and Cetano Van Aspergem Z were the sixth pair to yield a clean first round in 73.443 seconds.

Cetano Van Aspergem Z has scored numerous top placings during World Equestrian Center – Ocala’s 2022 USEF Summer Series recently securing the win during Week III’s $37,000 1.45m FEI CSI3* Power & Speed class. “Cetano had off last week because he did so well the week before. He is a hot horse, so he usually does well the more he goes, but today, he felt super.”

The pair went straight to the jump-off with the goal of beating the current leader, Luis Sabino Goncalves’ fast time. Lambre (BRA) and the 13-year-old Zangersheide gelding flew around the course taking tidy inside turns to stop the jump-off clock at 38.720 seconds.

“I thought it was a good class. The course was big and technical enough to have rails throughout the track. I think the grand prix on Saturday is going to be a nice challenge,” said Lambre.

The final double clean entry down the ramp was Dorothy Douglas (USA) and MTM Farm’s MTM Constantin (Diamant De Semilly x Cafe Creme). Douglas and the impressive 10-year-old Selle Francais gelding went straight to the jump-off galloping through the course while jumping to the top of the standards in 40.133 seconds to slide into third.