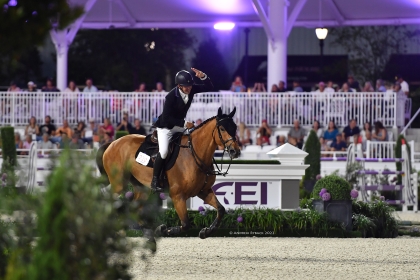 “I knew I could get the five from the liverpool to the Lugano vertical. Mike [McCormick] had Dorrie [Douglas] do it in the first round, so I knew it was right there. Then I thought it could either be the seven or the eight in the last line, but it depended on how you caught the Coca-Cola fence. I caught it exactly how I wanted to, a bit slower so I could do the eight, but once I landed the seven was right there.”

“I have had such a wonderful time here and I am already looking forward to coming back. I think that this was just the start, this facility has the potential to hold some of the biggest championships and I hope to be a part of them.”

Saturday’s $10,000 Buckeye Nutrition Futures Prix course proved challenging for many as only nine went on to the jump-off, but it was no match for Dorothy Douglas and Davenport Farm’s MTM Pablo.

“I was pretty determined to win today. Yesterday, I ended up getting second place in both of the derbies, so today, I was chasing that blue ribbon. My parents just flew in yesterday, and they always seem to bring me luck, so I am happy that they were in the stands cheering me on this morning.”

“The handy was hard. Dorrie [Douglas] went in and did a turn that I wasn’t planning on doing. She did the tight turn after fence one, before the double combination. I knew I had to do exactly what she did in order to win, and it had to be done well.”

“Hela is a little mare that I got about seven months ago. I started her in the 3’ Greens and recently moved her up to the 3’3” Greens. She is an amazing mover with a gorgeous jump.”

Jennifer Prior and Having Said That were victorious in the $10,00 WEC Ocala 3’ Jr/Am Hunter Derby.

“He is a lovely horse. I have had him for four or five years now and he has been a blessing. He’s a total sweetheart in the barn and always tries his best for me in the ring.”

“Vick Du Croisy came last Tuesday from quarantine. This was her first week showing and she jumped to third on Wednesday in the 1.45m Speed class. She won’t do the grand prix this week, but hopefully the national grand prix soon.”

“This venue has endless possibilities. It’s such a wonderful atmosphere for the horses and the riders. It’s a huge asset for us because we are now able to bring our five-star horses and ones that we are developing. It’s truly a spectacular venue.”

“I watched the current leader, Richard Spooner’s round and made my plan. I tried to do the same track as Richard. I did one less in the line by the hotel after I saw Kristen Vanderveen do it with both of her horses. Pampero is a pretty big horse, so he was able to get down in the five easily.”

Holloway and Biloba De Chaines earned last week’s third place spot on the leaderboard in the inaugural FEI CSI3* 1.40m Speed. The pair proved that they were still at the top of their game as the duo put forth an effortless round in an uncatchable time of 63.93 seconds, almost three seconds faster than second place finisher, Sophia Siegel.

Congratulations to all competitors on another successful week of equestrian sport at World Equestrian Center – Ocala!