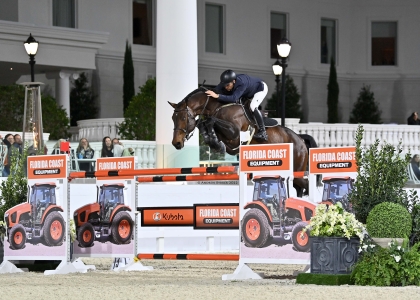 Ocala, FL – The atmosphere was electric in the WEC Grand Arena as fans filled the stands and an international field of competitive athletes representing ten countries gathered to contest the $75,000 Florida Coast Equipment Grand Prix. Two-time Olympic Games course designer Leopoldo Palacios (VEN) set the intricate tracks that featured an imposing triple bar in a triple combination that challenged many riders throughout the class. Although eight horse-and-rider combinations managed clean first rounds and four jumped double clear, it was Olympian Santiago Lambre (BRA) and his own Chacco Blue II that emerged victorious.

Lambre and Chacco Blue II entered down the ramp of the WEC Grand Arena toward the end of the order navigating a seamless first round, jumping each fence with ease in 81.962 seconds.

“[Chacco Blue II] is an incredible horse. He is actually blind in one eye. He wouldn’t know it because he has been blind in that eye since he was two,” said Lambre. “He just left quarantine. He was in quarantine for 40 days, where I rode him and jumped him. I just showed him in three classes, then we came to do the Grand Prix and won!”

Lambre and Chacco Blue II were the second to last pair to return to try their hand at the short course, “I didn’t expect to win, because this is our first Grand Prix together here at WEC, but I gave it a good try. I was very tidy from one to two. Then I tried to do less strides everywhere because he isn’t the fastest horse and it worked.”

Lambre and the 15-year-old Oldenburg stallion galloped through the entire course, leaving out strides while taking tidy inside turns to stop the jump-off clock at 40.983 seconds for the win. Tonight’s result marked Lambre’s third Grand Prix win during the 2022 Winter Spectacular Show Series.

Rodrigo Pessoa (BRA) and Artemis Equestrian Farm LLC’s Carlito’s Way (Casall x Nicoletta) were the second pair in the class to produce a faultless first round in 81.767 seconds. Pessoa and the careful 12-year-old Holsteiner gelding returned for the jump-off, dashing through the course in 41.446 seconds to ultimately earn second place.

Kelley Robinson (CAN) and her own Blue’s Yer Daddy (Mr Blue x Esprit De Lys) entered the $75,000 Florida Coast Equipment Grand Prix toward the end of the order, delivering a gorgeous first round, leaving all jumps up to secure the fifth clean first round in the class with a time of 82.948 seconds. Robinson and the 15-year-old Belgian Warmblood gelding returned for the short course, rolling through the track to stop the clock at 43.013 seconds to round out the top three.

The last double clear round was captured by Grant Seger (USA) and Grey Fox Crossing’s Cantucchini (Cloney x Capera). Seger and Cantucchini produced a smooth first round in 83.032 seconds, just within the time allowed of 84 seconds. The pair returned for the jump-off, delivering a smooth round, leaving all rails up in 43.768 seconds, to earn fourth.

Will Simpson and his own Chacco P received the fastest four-faulter award in the $75,000 Florida Coast Equipment Grand Prix, delivering a time of 75.856 seconds in the first round with one down.