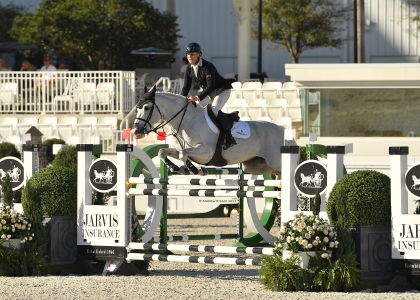 The pair’s first round effort yielded clear in 67.409 seconds, well under the time allowed of 74 seconds.

Wordley’s plan was to attempt a very tidy and challenging turn to the second to last fence in the jump-off, “Gatsby is particularly good at those types of turns. He can come up inside and turn up to a vertical in one stride. It’s his specialty, actually. I felt confident I could make up time in that turn. It walked a nine but, in the bend, I had to add one extra so he knew where he was going, and it worked out perfectly,” stated Wordley.

Wordley and the fan favorite Gatsby landed after the tricky inside turn, to gallop down to the last fence in nine strides stopping the clock at 39.107 seconds with all rails up.

Lisa Goldman-Smolen (USA) and Barbara Disko’s Sovereign were the first pair in the class to produce faultless rounds. Goldman-Smolen and the 13-year-old Selle Francais stallion delivered a smooth and fast first round in 68.593 seconds. The veteran pair advanced to the jump-off, crossing the timers in 41.273 seconds with all of the rails up to ultimately earn second place.

Kristen Vanderveen (USA) and her own Bull Run’s Prince Of Peace (Cardenio x P-Comtesse)  rounded out the top three in today’s $20,000 C. Jarvis Insurance Welcome Prix. Vanderveen and the careful 13-year-old Holsteiner gelding navigated a lovely first round, jumping to the top of the standards in 68.484 seconds. The pair jumped-off immediately, dashing through the course while leaving out strides to stop the jump-off clock at 40.030 seconds, with one rail down.