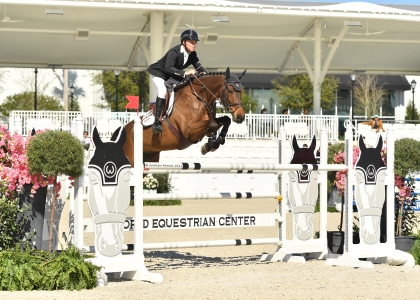 Wordley competed with Valentine Car in last night’s $75,000 Coors Light Grand Prix, but Valentine Car was a little more bright than excepted, “I started riding him in December, so the partnership is still new. I think we are starting to establish a partnership, but last night he fooled me. He warmed up normal and then got to the ring and grew to about what felt like 18hh! I didn’t ride my best last night, so we needed to go again today and thankfully we did because he jumped great.”

Wordley and Valentine Car first round effort produced a time of 65.544 seconds on the clock, well under the time allowed of 71 seconds. Wordley and the 13-year-old Warmblood gelding advanced straight to the jump-off, quick over the ground and with tight turns to stop the clock at 31.840 seconds.

“Valentine Car is a super fast horse off the ground. When he isn’t too fresh he is super rideable, and today he was perfect,” said Wordley.

Vicente Guillen and Rafael Celis’s Cornut GP (Cornet Obolensky x Baloudera) snatched the second place finish in today’s $15,000 WEC Ocala 1.45m Jumper Classic. Guillen and the nine-year-old Oldenburg stallion navigated a gorgeous round, easily jumping each fence in 68.329 seconds. The pair jumped-off immediately, rolling through the turns while jumping to the top of the standards for a time of 32.069 seconds, just behind Wordley and Valentine Car.

Lisa Goldman-Smolen and Barbara Disko’s Sovereign (Frontal x Galledent) rounded out the top three in the $15,000 WEC Ocala 1.45m Jumper Classic. Goldman and the 13-year-old Selle Francais stallion produced a very quick first round, stopping the first-round clock at 63.203 seconds. The pair advanced to the short course, dashing over the jumps while delivering speedy turns for a time of 33.479 seconds.