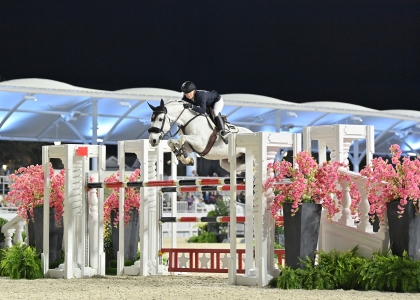 This week’s Sunday Spotlight shines on amateur Jacqueline Ruyle of Houston, Texas. Ruyle recently began her grand prix journey and has earned multiple top placings in featured classes during the 2022 Winter Spectacular Show Series. She took time to chat with us this week about her riding career and current horses.

WEC: When did you first start riding?

Ruyle: I began riding in my early teens. My parents are from South Africa, and my mom used to ride when she lived there. When my brother and I got a bit older, and my mom didn’t have to take care of us all the time, she got back into riding. When she started riding, so did I. She built a barn and an arena. Then we bought ourselves two
Quarter Horses.

I started in the hunters doing small 2’ classes in local shows. We bought my first horse when he was 20-years-old, and he was amazing. His name was The Bandit and we called him Frito. He was this little Quarter Horse/Thoroughbred cross that I showed in the hunters until I learned rhythm, then we switched to the jumpers. I retired him around 22-years-old and we purchased another jumper.

I had one horse here and there throughout high school and college. Then I met Daniel Bedoya, and that’s when my riding really took off.

WEC: Tell us about your current horses.

Ruyle: San Chano was my first grand prix horse. I have had him for about three years now. I imported him from Germany when he was nine-years-old. Daniel and I went to Germany to try some horses and I fell in love with him. He is a little challenging at times outside of the ring, but when he gets into the show ring, he is super focused.

My other grand prix horse is the little gray mare, Cyramo Z. I love her so much. We bought her when she was jumping around the 1.20m in Europe as a seven-year-old. We bought her not knowing if we were going to sell or keep her. When I first rode her, she was a rocket. At that time, I was the time-fault queen. When I started to ride her, I fell in love with going fast and the spirit that she brought to the ring. I started to compete her in the 1.40m, then we thought maybe she can do the 1.45m and now we are jumping the 1.50m. She is a tiny little thing, she’s about 15.1hh with a short neck and short body. I can wrap my arms around her and give her a hug.

I recently just purchased a seven-year-old that I am pretty excited about. She is very unrideable at the moment, but I like her brain.  I’ve only been jumping her around a 1.0m because she is going to take some time to make up.

WEC: Did you ever believe that you would be riding at the grand prix level?

Ruyle: Honestly, I had no idea. My mom and I were backyard riders. My parents always thought a career was very important and horse riding wasn’t a career. I ended up going to school to become an engineer and I graduated from the University of Texas at Austin with a Mechanical Engineering degree, top of my class. My dad said I need a very solid backup plan, so I thought, okay, engineering, it doesn’t get more solid than that.

I worked for two years with just one horse on the side doing horse shows on the weekend. I loved horses so much more than what I was currently doing. I wanted to be at the barn all the time and I worked has hard as I could to make that happen. I ended up meeting Daniel Bedoya and he believed in me. I wouldn’t be here without him. He brought me to try a bunch of horses in Europe where we purchased three. We sold some, kept buying and it just grew. I never thought I would actually be where I am today.

WEC: Is this your first time here?

Ruyle: This is my first time here and I was shocked. The facility is unimaginable. The hotel is beautiful, the arenas are pristine. I love that the barns are so warm, it has made this week much more bearable in the cold. The footing is incredible, and the horses love it.

WEC: What are your future goals?

Ruyle: I have already done quite a few two- and three-star grands prix and I think San Chano has more in the tank. So, I hope to just keep growing with him. I plan to put my little gray mare in her first FEI grand prix too. Ultimately, I would like to continue to stay consistent and keep learning. Get the mistakes out of the way and step up a little bit more.

Thank you, Jacqueline, for speaking with us and we wish you all the best!