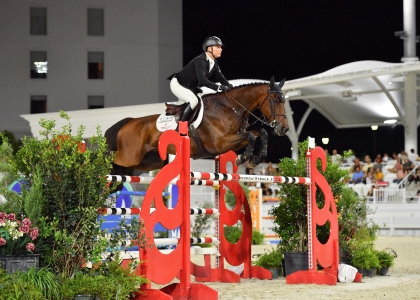 Catsy Cruz’s first round track asked a number of questions that challenged numerous riders throughout the night. A solid nine riders from five nations were able to find the key to a clean first round and five jumped double clear including winner Sharn Wordley.

“The first course was challenging. There was a lot of good horses and riders here tonight, from Olympians to World Champions and only a handful made it clear,” said Wordley. “The yellow double combination was a bit tricky; it was either a flat five or a very short six off a wide oxer. On my first horse, Mick Jagger, I did five and on my other two I did the six, but a lot of riders struggled with that one.”

Jad Dana was the first of the nine secure a double clean ride aboard The Cherie Group’s Fleur-De-Lis’Cherie in 40.962. Kelli Cruciotti Vanderveen and Forever SFN were the second double clean ride of the night, but were unable to catch Dana’s quick round.

“Gatsby is 18 going on 19-years-old and he feels as good as he has ever felt in his life. He’s a horse that came from Richard and Andrew Bourns from Ireland and you can’t beat a good Irish horse, they peak when they are 18, so he has much more left in the tank.”

Wordley returned shortly after with Valentine Car (Son of Juan Car x Sofia Car). “I knew with Santiago [Lambre] coming in last, he was going to be right on my tail end, so I had to be even faster. Valentine Car is such a naturally fast horse, I used his speed across the ground to my advantage, I was thinking about leaving a stride out to the last fence but I didn’t have to.”

Wordley and the 13-year-old Warmblood gelding flew through the finish stopping the timers at 38.999 seconds for the victory.

Wordley and the speedy gelding have been on a roll this month, “I have been doing some FEI classes with him and he’s been doing extremely well. He’s won three grand prix qualifiers in Tryon, CSI3* grand prix and then he came here and won this.”

“He was bred here in Ocala by Fernando Cardenas. He actually bred him with one of his mares and a young dressage stallion that jumped out of a paddock,” laughed Worldley. “He such an incredible horse with such a unique story.”

Last to return was Santiago Lambre (BRA) and his own Chacco Blue II (Chacco-blue x Naiti Rouge). Lambre and the 15-year-old Oldenburg stallion soared around the track in 39.574 seconds which was good for second place.

Santiago Lambre also received the fastest-four faulter award aboard his other mount Pampero in the $100,000 Stella Artois National Grand Prix after posting a time of 74.655 seconds with one rail down.

William Simpson received the ‘Luck of the Draw’ award.