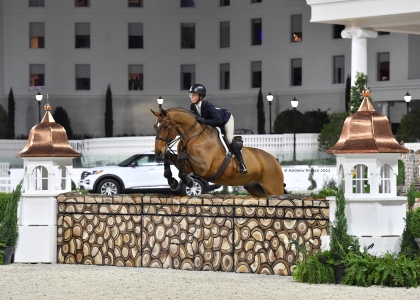 Renowned equitation course designer, Bobby Murphy of Lexington, Kentucky, created the elaborate tracks that featured multiple stunning hedge walls, a Swedish oxer double combination and stunning arch standards. “It’s the Premier Equitation Cup Championship. The word ‘championship’ is the key here. We gave the arena a championship look, we had championship level competitors, we had a champion at the end, and a champion trainer. Skylar rode beautifully tonight. She made the second course look easy, then proved herself in the test. I asked a lot of very challenging questions in today’s tracks, and I think overall it was a magnificent class where each rider was able to take something away.”

World Equestrian Center – Ocala’s Director of Operations, Vinnie Card was eager to host the Premier Equitation Cup Championship once again, “We had such a great time during last year’s Premier Cup. It is very exciting to welcome some new faces to World Equestrian Center – Ocala from all over the country. Tonight’s competition was tough, but it was a great opportunity for the young athletes to showcase their talent in the Grand Arena.”

The WEC Premier Equitation Cup Championship kicked off on Saturday afternoon with an over fences phase that presented an intricate track that asked rider’s to test their equitation along with their accuracy. Skylar Wireman, Augusta Iwasaki, Jake Endicott and Christian Dominguez caught both of the judges’ eyes early on.

The top 20 riders were brought back to the WEC Grand Arena to complete the flat phase where the athletes took to the rail. The judges asked quite a few questions such as a counter canter in both directions and to drop their irons. All four athletes continued to stand out, with Wireman leading the pack.

In the evening, the WEC Premier Equitation Cup Championship returned to the WEC Grand Arena under lights for the second jumping phase, where riders were given an even more elaborate track to negotiate. Jake Endicott of Rancho Santa Fe, California, and Kyle Timm’s Izar were the sixth pair down the ramp to take on the second track, laying down an impeccable round to earn high remarks from the judges.

Just three trips behind, Endicott rode Christian Dominguez and Donald Stewart’s Iwan (Quasimodo VD Molendreef x Katarma). The pair stepped up and made an impression to ultimately earn a spot in the testing round.

Next, Augusta Iwasaki returned aboard Ashland Farm’s Cohiba VDL (Chacco-Blue x Acorda), finding each distance out of stride and challenging final rider, Wireman, to best her flawless round.

Skylar Wireman and Charisma were the final pair down the ramp into the WEC Grand Arena, navigating a foot-by-foot perfect round, to retain the top spot on the judge’s cards.

After the second round, the judges asked their top four riders: Jake Endicott, Christian Dominguez, Augusta Iwasaki and Skylar Wireman to return for a final test; an even more challenging track that asked riders to trot a fence, hand gallop, halt and hold a counter lead in a tidy roll back.

Endicott, Dominguez and Iwaski all delivered solid tests, but none could best Wireman and Charisma’s impeccable test. The pair easily completed each challenging question in perfect form, to ultimately earn Wireman the Premier Cup Title and a brand new SUV!

Wireman was very excited to compete in the WEC Premier Equitation Cup Championship, “I flew in yesterday from California. I have been looking forward to this class for quite a while now. Ever since I heard about the class last year, I’ve wanted to compete here.”

“I am so thankful to be able to ride Charisma in this class. He’s truly the best horse in the country. I knew I was going in with a reliable partner, so my goal was to just lay down nice, solid trips to put myself in the pack. I was sitting in top on the second round, which was super exciting, but I tried not to get a head of myself. Then going into the work-off I was able to see the challenges that other riders faced, so my goal was to stay consistent and Charisma was right there with me.”

Wireman’s trainer Andre Dignelli had an idea of what to expect for this year’s Equitation Cup, “I was here for this class last year so I had an idea of what to expect. You need a brave horse, because you have a lot of equipment, decoration and beautiful jumps. You need a careful horse, certainly Charisma is all of that and more. We picked this class to peak into a nice moment. I think it is exciting that this facility is getting on everyone’s calendars, whether it’s for the money, the car or both. But, in the end, the production of the class feels important, it looks special and we are very grateful to be here.”

Wireman took her new wheels out for a spin with her winning trainer, Dignelli, “I was having a little too much fun taking the car for a spin. I don’t have a car of my own yet, so this is very exciting. I tried to keep myself focused on the courses, but I had the car in my eyesight while riding around the arena.”

Wireman’s mother, Shayne Wireman, who is also a well-known trainer was so happy to witness Wireman in the class, “I wasn’t going to come, because I had student’s showing at Thermal, but I just couldn’t miss this. This was a big dream of Skylar’s to come and show here and I am so happy to be able to experience it with her.”