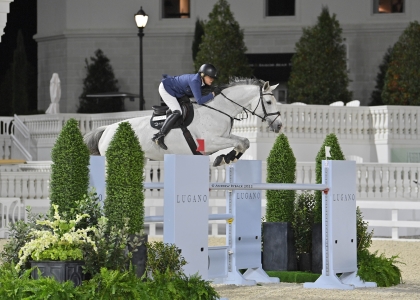 MTM Apple has been in Fenney’s stable for several years, “We purchased Apple when she was seven. She was so good and so easy that we sent her home right away. She started doing the Grands Prix when she was an eight-year-old and just kept getting better and better, year-after-year.”

Fenney and MTM Apple were the fourth to last pair to return for the jump-off. “I watched Rowan Willis go on [Wellington Grey Goose] and he was incredibly fast. I knew if he left all the jumps up, he would be impossible to beat. Luckily for me, he had the last one down. I also knew Aaron [Vale] was right behind me and he’s won so many Grands Prix, I knew I was going to have to go pretty darn fast. So, I did what I had to do, and Apple kicked into high gear.”

Fenney and the 11-year-old Danish Warmblood mare flew through the entire course, taking every inside turn available, stopping the clock at 48.021 seconds to secure the top spot.

“Apple is the best. She is always right there with me, and she is such a trier.  She sill makes me laugh because she is such a big, relaxed mare that just walks her way down into the ring, but as soon as we get to the jump-off, she puts the gas pedal down.”

Austria’s Peter Petschenig and Brooke Person’s Ennebel Van Het Posthuijs (Numero Uno x Annebel) secured the second place finish in tonight’s $75,000 Hampton Green Farm Grand Prix. Petschenig and the 13-year-old KWPN mare navigated the first round track stopping the clock at 81.471 seconds, well within the time allowed of 85 seconds. The pair were the last to return for the jump-off, producing tight inside turns while leaving out strides to stop the timers at 49.189 seconds.

Tom Foley (IRL) and his own Idalgo (Catoki x Quidam’s Olgam) rounded out the top three in tonight’s $75,000 Hampton Green Farm Grand Prix. Foley and the nine-year-old Dutch Warmblood gelding delivered a superb first round in 82.331 seconds. Foley and Idalgo advanced to the jump-off delivering a quick round while leaving all rails up to stop the jump-off clock at 50.384 seconds.

An additional $5,000 was awarded to the fastest four-faulter of the $75,000 Hampton Green Farm Grand Prix. Jacqueline Ruyle and her own San Chano received the award with an incredibly fast time of 76.022 seconds with one down.

Luis Sabino Goncalves received the $5,000 ‘Luck of the Draw’ award.

Hampton Green Farm is dedicated to the development of the Pure Spanish Horse for Dressage in America. Hampton Green Farm produces unique sport horse with emphasis on beauty, athleticism, and excellent temperament. HGF operates not only as a breeding farm, but also as a dressage training, boarding and sales facility in Ocala, FL and Fruiptort, MI.