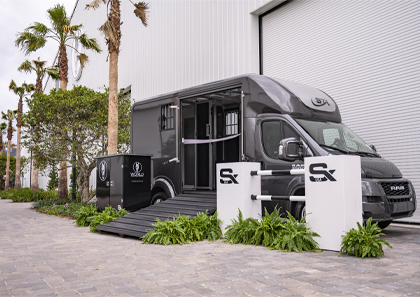 OCALA, Florida – January 27, 2021, – StephexUSA/STX Vans has joined the World Equestrian Center — Ocala family of sponsors. The sponsorship is focused on support of the venue’s new series of seven dressage events throughout the year, ranging from Level II through international CDI competition.

As part of the agreement, STX will award three of their STX Showboxes to be used as dressage competition prizes recognizing high points and percentages as follows:

Exhibitors and guests at World Equestrian Center — Ocala can see a stylish STX Van, which will be on display at the facility outside Arena One throughout the year.

“We are grateful to StephexUSA/STX Vans for their support of our dressage series, said Roby Roberts. “We are proud to display their exceptional STX Vans at World Equestrian Center — Ocala.”

“We could not be prouder to be joining the WEC family of sponsors! Our STX Vans have been revolutionising equine transportation in the U.S. and we are excited to see where this new collaboration will lead” Stephan Conter, founder and CEO Stephex Group Worldwide.

STX Vans is the newest addition to the product range of Stephex Horsetrucks. Stephex is Europe’s leading horse transport manufacturer with thousands of custom-built trucks on the road. Since 2012, STX has been producing the very popular STX 2Horses vans, allowing drivers to transport their horses with comfort and ease without the need for a CDL driver’s license.

The STX European designed trucks are now being offered on the American-made chassis creating a new dynamic option for horse transport in the U.S.

STX Vans are built by the same production process that has made STX Europe the most reliable and successful horse transport manufacturer.