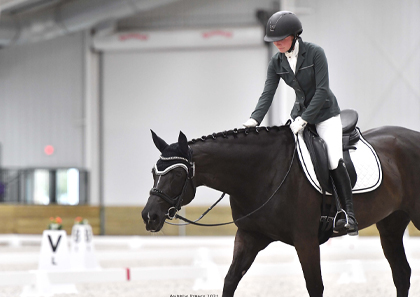 This week’s Sunday Spotlight falls on Follow Me to the Moon (Frohwind x Liliuo Lily), a 12-year-old Oldenburg mare of Bridle Oaks Farm in Ocala, Florida, owned by Charles and Lynn Boyd, and ridden by Kristen Parker. Follow Me to the Moon, or “Luna” in the barn, was bred by Lynn in 2008 and was meant to just be a fun project, but she has shown impressive potential in the dressage ring and is moving her way up the levels. This week, Lynn and Kristen brought Luna to World Equestrian Center — Ocala for the World Equestrian Center Dressage XIII show. They took some time out of their show schedule to chat with us about the special mare, their hopes for her future and their first experience at World Equestrian Center — Ocala.

Kristen: I was seven years old and my family had just moved into Ocala Downs. A girl down the street from me rode ponies and I went to one of her lessons, then begged my mom to ride for six months. She finally gave me a lesson for my eighth birthday and it was game over from there. My mom also rode, so I’m sure it wasn’t that hard of a decision for her, but my dad was very adamant that I was not going to do horses. But, here we are!

Lynn: When I was a little kid I got bit by a pony. My parents joked that it’s like a vampire, once it bites you, you become a horse person.

WEC: How did you get into dressage?

Kristen: I’ve always done dressage. My first pony was a small Arab that I attempted to do eventing with, but she was not a jumper. That got me started in dressage and it took off from there. I retired my pony when she turned 18, and I was 14 or 15 years old at the time. I was kind of stuck in a lull of not having a horse, and that’s when I got my pony jumper, Jade. I also got into finding opportunities to ride. It didn’t matter what discipline it was, as long as I was able to ride. That’s really how I got into the jumpers. I’ve been lucky to have the opportunity to get back into dressage, because that is really where my heart lies.

WEC: Tell us about Luna.

Lynn: I bred Luna and she was born on my farm. I was really just doing it for fun at the time, so I got what I got. She had two bad accidents as a baby and two surgeries, so I wasn’t sure if she would ever be sound. I had her broke, then I would get on her to walk and trot. My neighbor had a dressage trainer over one day, so I took Luna over. The trainer commented that she was a really lovely mover, so that is how we ended up doing the dressage.

I may have over-pampered her because of her accidents, and I think that may be a part of her attitude, now. She got away with things that a professional would have never let her get away with, but she was just so cute. It was a learning lesson, for me. I think there’s really something there and she’s working her way up the levels successfully. We’re having fun.

I was Luna’s primary rider until Kristen came along and my philosophy has always been to be serious, but have fun. If it’s not fun, I won’t do it. You can’t make it to where you’re stressed and you stress your horse out, that’s not what I want to do. But I do believe in challenging yourself.

Kristen: Luna is a free spirit. I’ve encountered a lot of horses and she is truly one of a kind. She’s easy to read in some areas, then in some areas you can’t understand her. She has definitely been the most difficult horse that I have ever ridden. She’s spunky and it’s her way or the highway, so you have to make everything her idea. When I first started riding her she put me through the loops. She made me question my ability to ride every day. She would get so mad at me that I thought maybe I just didn’t know how to ride. I want to say that I have her figured out these days, but I know that I don’t. She’s truly one of a kind and you just can’t help but love her.

WEC: Tell us about Luna’s progress in the dressage ring.

Lynn: Luna is 12 years old now, but she had a late start. I didn’t do anything with her until she was four years old and we didn’t actually start training her until she was well into her fifth year, and didn’t start showing her until year six. Since she is so opinionated, she is taking longer to go through the levels, too. I see other horses that just do their jobs, but Luna wants to have a full discussion about it. She wants to bring her briefcase. It’s been a challenge, but that is what has made it fun. It’s really rewarding because, if you have a really good ride on her, it’s because you’ve really worked for it.

Kristen: Something has clicked with Luna over the past six months, whether it be the training or something else, but she has just been so game. I haven’t seen the attitude as much. I have great days every day with her. I love that she is loving her job. She’s very special.

WEC: How was the World Equestrian Center Dressage XIII show for Luna this week?

Kristen: The show has gone really well. This was her first show at World Equestrian Center — Ocala. I brought Luna on Wednesday and schooled her and had a lesson. She came off of the trailer a little wild, but once we were in the ring she was pretty good, overall. She had Thursday off at home, then came back on Friday and schooled. We showed Saturday and today, and she was great. She felt like she knew that she was showing and was under a little bit of pressure, but I walked her for a long time and got her really relaxed. Then, we went down centerline and gave it our best shot. About 45 seconds into our test, it clicked. She finished really well and we ended up with a 66.3% and finished 2nd in the Junior Young Rider division and 5th overall. We ended up with a 62.1% today and 1st place. I’m really happy with her.

Lynn: I’m a member at Golden Ocala, so I have been anticipating the opening for a while. Our expectations were that it was going to be a top-notch, first-class venue, and I think it is every bit that, and more. I can’t say enough good things about it.

What I also think is cool about World Equestrian Center — Ocala is that, for the first time, a horse show venue is combining the horse world and the general public. I believe that, unlike other sports where the general public is involved, they are not very involved in equestrian sports. They are almost intimidated by it, but almost everyone loves horses, so why not make it fun and welcoming for everyone? The general public can come to World Equestrian Center — Ocala and feel like they are part of the sport. I think this is the place that can change that perception.

Kristen: Ocala holds the designation of “Horse Capital of the World” and I feel like World Equestrian Center — Ocala solidifies that designation and brings it into focus.

Thank you, Lynn and Kristen, for sharing Luna’s story with us, and congratulations on a successful weekend!