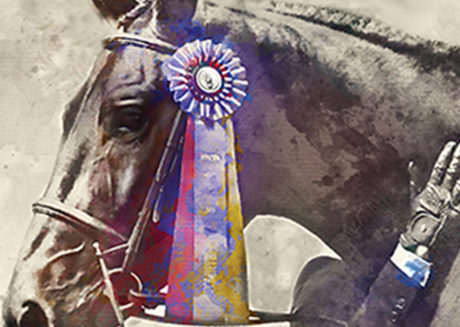 This week’s Sunday Spotlight lands on Lindsay Vail, a budding amateur who you may recognize from the cover of Volume II 2020 of the WEC Magazine. Andrew Ryback of Andrew Ryback Photography captured the stunning image of Lindsay and her horse Gatsby, and we were dying to know the story behind the photo. Lindsay took time this week to chat with us about her two lovely horses and give us the inside scoop behind the cover of the WEC Magazine.

Lindsay: I grew up on the south side of Chicago and there wasn’t really any horses there, so I have no idea where my obsession and love for horses even came from. I just remember as a kid thinking that I had to have a horse. I loved them and wanted to be around them. After years of begging my parents, I finally got to take a riding lesson. My grandmother had a vacation home about three hours outside of Chicago in the northwest corner of Illinois. It was a resort-style community with golf courses and a riding center. She surprised me one summer and asked if I wanted to start taking riding lessons. I didn’t even believe her at first. She was a pretty young grandma, so we started taking lessons together at the local riding center. At first I just took western lessons, then I learned how to post and as soon as I got better at that, all I wanted to do was jump. I switched over to english and started taking jumping lessons. The next year we leased a horse, then we bought one, then we bought another one.

My first horse was this enormous 17h Thoroughbred. It made no sense for us to buy a horse that big because I was seven years old and about 50 pounds. However, we was the sweetest horse. He was an old jumper, so he was one of those point-and-shoot type horses. I learned the ropes of jumping from him. My grandma loved western riding, so we got a Quarter Horse, as well, who was a western pleasure horse. I started learning how to do showmanship and halter classes and showed a little bit. It was great that the barn we were at was a multi-discipline barn. There were different clinicians that came through the barn and, whatever clinic was there, my grandma would make me do it, whether it was cow cutting, dressage or hunters. She wanted me to learn everything. Between the two horses I was able to do that.

WEC: When did you start showing?

Lindsay: When I got the horse show bug I started doing more of the hunter/jumper shows. I mainly did schooling shows, I didn’t get into the A circuit until about seven years ago. My grandma loved to collect horses based on what color they were. She loved the color breeds, so we had a gorgeous Palomino and the sweetest Paint Quarter Horse. My grandma was very much about working with and appreciating what you have, so I never had a fancy hunter or anything. She would just say that I could teach ours how to jump. The sweet little Paint horse, who was built completely downhill, would lope around and jump. When I got into high school we moved the Paint horse down to a barn closer to where I was living in Chicago. It was a nice hunter/jumper barn with a great group of friends my age, and we’re actually still friends to this day. My little Paint Quarter Horse didn’t really fit in with all of their horses. They were all doing the Junior Hunters and Jumpers, and my little guy didn’t always get his lead changes and, at the time, no one was riding a Paint in the hunter ring. I had attended a riding summer camp on the east coast for several years and learned how to braid, so I would tag along to horse shows and braid whoever I could so that I could still be a part of the horse world even though I wasn’t showing.

When it came time to go to college I knew that I wanted to ride in college. I didn’t want to ride on a team, I just  wanted to have my horse there with me. I went to Sweet Briar College and took my Paint Quarter Horse with me. If we didn’t fit in at the barn in high school, we really didn’t fit in at Sweet Briar. I spent two years at Sweet Briar and had him in the riding program, and it was amazing. By the time I was a sophomore in college it was time for him to retire.

I stepped away from riding once I finished college and started working full-time. I worked in the investment management industry, which is high-demand, and lived in downtown Chicago. In 2013, I moved to Minneapolis and my first priority was to start riding again. I started to really get back into it and the cycle started again. I leased a horse for a little bit, then I bought one, then bought another one and got really into showing.

Lindsay: I have Quigley, who is my jumper. I signed the papers to buy him on my 30th birthday. He’s been the best horse. He took me from the Long Stirrup, to the 3’3″ A/Os, to my first derby. I traveled all over the country with him. He got hurt and had about a year and a half off for a ligament injury. He came back from his injury at 100%. We never thought that he would recover the way that he did. When he came back from his injury he had so much life in him that there was no more containing him in the hunter ring. We had to put him back in the jumper ring. He was a 1.40m horse before I got him. I had never done jumper classes before, so he taught me that whole world.

I also have a hunter named Gatsby. We do the 3’3″ A/Os. I got him about three and a half years ago. During the time of Quigley’s injury we looked for a lease to keep me in the saddle until he got better. I found Gatsby, and he turned out to be an amazing horse. I decided that I couldn’t get rid of him, so I ended up with two horses. Now I just enjoy life with a hunter and a jumper showing.

WEC: Tell us about their personalities.

Lindsay: If you could get two horses that were polar opposites, it would be my two. Quigley has such a big personality, and that is one of the reasons that I love him so much. Friday was his birthday and he turned 16. I knew the second that I saw him that I had to have him. I walked into his stall and went to pet him and he bit my hand, then looked at me with his little ears perked and the cutest look on his face. He’s the king of the barn, and he knows it. He prances around the aisles, always whinnying. He’s a trooper in the jumper ring. He’s extremely quirky, though. He’ll spook at his own shadow or see something at the end of the ride and do a big spook. He’s also very independent and does whatever he wants. He doesn’t like to be kissed, hugged or loved on. He has his own agenda.

Gatsby is like a sweet baby puppy. He has the kindest soul of any horse I’ve ever met. We jokingly call him needy because, if you walk past the crossties or his stall, he reaches his head out and wants to put it on your shoulder. He wants to hug you and be scratched. If you scratch his neck, he’ll scratch your back. He’s just as sweet in the ring, too. He’s the super mellow classic hunter type. He’s just a good boy.

WEC: Which horse is on the cover of the WEC Magazine?

Lindsay: Gatsby is on the cover. I had gone down to the St. Louis Charity Show in December to try horses right after Quigley had gotten hurt. I tried Gatsby and instantly fell in love with him. We took him on trial and had him at home for about a week, then my trainer decided that we should see what he horse shows like. Normally I would never horse show a horse that I’ve only had for a week, but we decided to see what we had. He was Champion in several divisions and won a huge Adult Classic. That photo was taken by Andrew Ryback as we were waiting to get our Champion photo taken.

Lindsay: I live in Wellington now, which was an unplanned move due to the virus. Last year, I wanted to show in Wellington and my trainer in Minnesota had set me up to come with another trainer for the circuit. I just wanted to experience it and thought it was the right time. Quigley was still off, so I just brought Gatsby. The classes were very competitive and I had zero expectations for myself, but we ended up getting a ribbon in almost every class. It was really confidence boosting.

This year I wanted to bring both horses. With Quigley getting older, I wanted to say that I had one more piece of history together. I brought them both down this year. My goal was to do the A/Os, which is a crazy division because you’re riding next to these people that you’ve followed on social media and in equestrian news your whole life. It was kind of surreal. Also, being able to do the jumpers there was a goal. Having two horses there and showing in that competitive of an environment was amazing.

After the circuit, the  virus and quarantine kind of forced my hand, so I refocused my energy on riding. I think being based down in Wellington is going to be helpful. We’ll see what horse shows bring for the summer, but if we could get some good ribbons, do some derbies and get some more consistent rounds that would be great. I think I will be moving up into a bigger jumper division this year with Quigley, so learning that is a goal, too.

I work full-time, so being an amateur, it’s hard to balance staying focused on horse show life and maintaining a high level at your actual job so you can pay to show. I’m lucky that I get to work remotely now and work where the horses take me. It allows me to focus 100% on both. I know not a lot of people get to do that, so that’s really cool.

We can’t wait to see how far you take your amateur riding career, Lindsay!