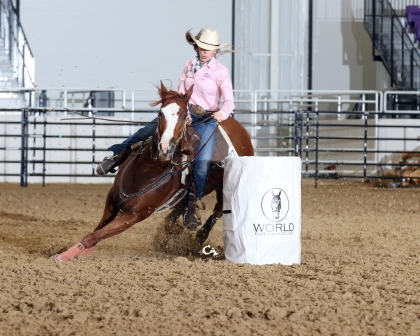 The 2021 inaugural Championship Show closed out on Saturday, October 23 with the Barrel & Futurity Sweepstakes where horse-and-rider combinations took to the new western area to race against the clock for the top prize. World Equestrian Center – Ocala would like to thank all of the exhibitors, trainers, sponsors and vendors that traveled from all across the country to join us for the first ever Championship Show event. Championship Show exhibitors traveled as far as California to compete and as a courtesy, World Equestrian Center – Ocala filled up of the tank of the trailer that traveled the farthest.

The show was filled with top equestrian competition and amazing prizes. The Championship Show gave out an abundance of prizes including a brand new $60,000 GMC Truck to the winner of the 15-18 Horsemanship Challenge that was won by Hanna Olaussen & Wearin Only Moonlite. Some other highlights from the show include the Western Pleasure and Hunter Under Saddle finals where top competitors competed for the big trophy. The show also highlighted two Freestyle Reining classes that were held in the new western Arena 5.

The Barrel and Futurity Sweepstakes was held on October 20 – 23 where horse-and-rider combinations traveled from all over to run the new western arena. Each rider was faster than the next making for fierce competition.

On Saturday, October 23, Jordan Harrell and Playin in Vegas captured the $10,000 added 1-D Open with a time of 16.570 seconds to earn first place. Harrell had a great time running Playin in Vegas, “I don’t own her, I run her for a great friend of mine. She is only four and just started competing in November last year. She is a mare but she is not your typical mare, she is really easy to get along with, first to meet you in the pasture. She ran earlier today and won the futurity too. She is pretty special,” said Harrell.

Crowther is in awe of the new facility, “I am shocked with how beautiful this place is. I went and got a massage the other day, then went to the boutiques. It is like I am on vacation! Sissy also loves it here, her stabling is just amazing. They really thought of everything. I can’t wait to come back,” exclaimed Crowther.

To view all of the results from the World Equestrian Center – Ocala 2021 Championship Show, click here.

Additional exciting Championship Show highlights included two Freestyle Reining classes that were also held in the new western arena. On Saturday, October 9 ten stunning pairs took to the new western Arena 5 to contest the Open Freestyle Reining Class. Each exhibitor dressed to match their song of choice and it was Pete Kyle from Amarillo, Texas and his own KR Smart Dreamer that spun their way to the win.

On Friday, October 8 nine amazing horse and rider combinations took to the new western arena to contest the Non Pro Freestyle Reining class. Each competitor dressed up to match their song choice, there was a little mermaid, jail breaker, angel and grease lightning. Each competitor put on an amazing show, but it was Madison Hayden Rafacz and Shannon Rafacz’s Rio Good Shot that slid their way to the win.

The Win A Truck 15-18 Horsemanship Challenge saw a long list of youth exhibitors tackle a difficult horsemanship pattern to compete for the brand new 2021 GMC Truck. The competition was held in the Grand Arena and included two rounds. The top 10 finalists from the first go qualified to compete in the finals on Sunday, October 3. On Saturday, riders that did not qualify had another chance to try and earn a top 10 finish so they could compete for the truck on Sunday.

On Sunday, October 3, 20 finalists gathered in the WEC Grand Arena to contest the difficult pattern, and ultimately it was Hanna Iselin Olaussen from San Antonio, Texas and her own Wearin Only Moonlite who prevailed to take home an abundance of prizes included the 2021 GMC Truck. Her trainer Brad Jewett was also awarded the winning trainer bonus of $5,000.

The 2021 Championship Show also raffled away a brand new Harris Leather & Silverworks saddle, that was won by Dr. Leah Van Blarcom. The show also awarded trainer bonuses and luck of the draw prizes, ensuring that everyone had a chance to leave with something in their pockets.

Thank you to everyone that came to support the 2021 Championship Show and we hope to see everyone for the Sudden Impulse NSBA and Futurity show held on April 20 – May 1, 2022. The show will feature more than $360,000 in CASH prize money along with a new bonus of $50,000 added for all Novice classes and walk trot classes. This added money will allow a missing sector of an industry to show for large purses and prizes that is normally not awarded. These Novice and Walk Jog classes will be open for exhibitors of all breeds. Stay tuned for more information coming soon.