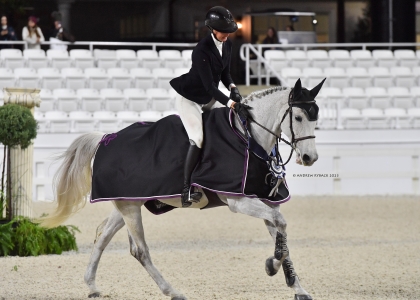 Harold Chopping and the Rein Family LLC’s Quadrant 3 closed the week with a victory in the $15,000 Taylor Harris Insurance Services 1.45m Jumper Classic.

“He’s a big horse with a lot of talent, scope and a huge step. That’s always what I try to use to be fast. I count the number around the corners and leave out steps where I can, I have to be a little scientific about it. He has such an easy way of go, it’s all very methodical. I use the numbers to my advantage and use his step as my gauge.”

“A slow double clear wasn’t going to give you much tonight, so I knew I had to give it my all. My first horse gave me a feel for the course, and I knew where I could save some time. ‘Pepita’ is even faster. She naturally just carries herself and covers more ground, so I just planned to go as fast as I could everywhere. She does it all and does it well. To the last oxer, I just kept kicking for all that I was worth.”

“He won the 1.20m and then the 1.30m, then I showed him once in a 1.35m. Now he’s just won this class. He’s a true athlete and such a nice horse. Throughout the entire ride today, he felt safe, confident and so strong. I am very thankful to be able to ride him.”

Lisa Goldman-Smolen and Barbara Disko’s Sovereign captured the blue ribbon in the $15,000 1.40m Jumper Classic after finding a blistering fast jump-off in 39.625 seconds for the win.

“He is enormous, with big scope and a huge step. He was second last week out in the Stadium. It’s pretty neat for a horse as tall and big as he is to go from the giant ring last week to come into a normal sized ring this week, and still be so rideable and handy. He’s kind of like a jumper, the more you power him up, the better he jumps.”

“It was a very fun handy. The course gave you the option of whether you wanted to really show off, or just stay out. Balou Velvet was really up for the challenge; I don’t know if I have ever ridden a horse as handy as her. You just look where you want to go and she’s already there.”

Lily Toensing and her own Consanto captured the victory in the $15,000 WEC Ocala 3’ Jr/Am Hunter Derby.

“He was incredible today. He felt super in the warmup and even better on course. We had a straightforward plan for the first round. We decided to go with the bold numbers in the lines. We did the eight and then the nine. With the more open stride, we set the tone for the rest of the course. He was super and attentive the entire time.”

“James Bond HX has a bit of a back story. Kate Conover got a video of James from Thaisa Erwin. I had been casually looking, because Frasier has been my only show jumping horse for two years now and I was thinking about potentially getting another one,” said Schaefer. “I ended up trying him over a few single jumps in Kentucky and I really liked him. So, we set up a date where I could go to her farm to jump him around a full course. Well, during that interim, we were talking about his breeding, and it turns out that his mother, Trezebees was the horse that I won Young Riders on my last junior year. After finding that out, I knew it was meant to be.”

Congratulations to all competitors on another successful week of equestrian sport!