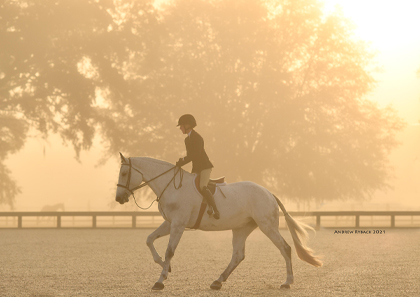 Week 2 of the World Equestrian Center — Ocala Winter Spectacular 2021 saw plenty of thrilling equestrian sport with a packed schedule of hunter and jumper classes each day. Feature class action included everything from 2’6″ hunter derbies to a 1.50m grand prix, offering competitive classes with prize money opportunities for riders of every level.

The $15,000 WEC Derby 3′ Open saw a field of 36 highly competitive entries, but it was Tracy Fenney who took the blue aboard MTM Farm’s MTM Animated (Swarovski x Kirunett). The pair took to the course early in the order in the first round, setting a high standard with a score of 90. When they returned for the handy round near the end of the order, Fenney and MTM Animated chose the inside track and all four high options for a score of 86, bringing their overall score to 176 for 1st place.

Friday also featured the $2,500 WEC Pony Hunter Derby. Katalena Prusso and Falcon Ridge Stables’ Worth The Wait (The Breas My Mobility) took the blue ribbon in the class and also earned top placings throughout the week in the NSBA Hunter 2′, Green Pony Hunters and Pony Equitation.

Saturday saw a thrilling battle between Aaron Vale and Tracy Fenney in the the $75,000 WEC Grand Prix 1.50m with seven of the top 12 placings being claimed by the two riders on multiple horses, but Aaron Vale landed in first place for the seconds week in a row aboard Thinkslikeahorse’s Elusive (Rodrigoo x Alouette). Vale and the 12-year-old Dutch Warmblood gelding flew to a 1st place finish in last week’s $75,000 WEC Grand Prix 1.50m and were determined to nab another shot at the win. The pair did just that, jumping a clear first round in a time of 83.492 seconds, well within the time allowed of 85 seconds. They then returned first in the order for the jump-off, leaving all rails up in an impossible time of 40.670 seconds, which would prove unbeatable.

Saturday’s $7,500 Futures Prix 1.40m saw a 1st place finish for Katia Manuel-Adams and Manuel Show Stables’ ERP van www.olland.biz (Amadeus x T’olga). The pair were in great form, navigating a clear first round in a quick 83.661 seconds and advancing to the jump-off. Manuel-Adams and ERP van www.olland.biz kept their speed on the short course, leaving all rails up in a time of 43.001 for the win.

Hunter action on Saturday included the $2,500 Non Pro Hunter Derby 2’6″. Emma Ensor and her own Miss American Pi (One Hot Krymsun x Sky Blue Walker) bested 24 entries to win the class and also earned ribbons in the Intermediate Children’s Hunter and Equitation throughout the week.

Congratulations to all exhibitors on a fantastic week!