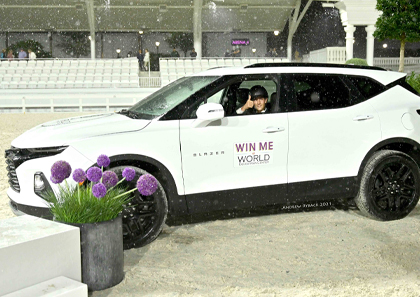 Week 6 marked the halfway point of the World Equestrian Center — Ocala Winter Spectacular. The week brought plenty of excitement across the show grounds with the highly-anticipated WEC Premier Cup Equitation Final taking place on Saturday night in the WEC Grand Arena where a 2021 Chevrolet Blazer was presented to the winner of the class, Dominic Gibbs, and top trainers were awarded with trainer bonuses totaling $100,000. The week also featured feature classes spanning from a 2’6″ hunter derby to a 1.50m grand prix, offering exciting classes for riders of every level.

Thursday’s $20,000 Welcome Prix 1.45m brought an international field of riders to the Stadium at World Equestrian Center — Ocala with nine countries represented in the class. Twelve entries managed clear first rounds and nine jumped double clear, but it was Brian Murphy and Light Speed Equestrian, LLC’s Denison Park Combat that raced to the win with an impossibly fast jump-off. The duo laid down one of the fastest first rounds in the class, jumping clear in 72.663 seconds, then advances straight to the jump-off, jumping a second clear round in 34.617 seconds, sliding comfortably into first place.

The prestigious Style of Riding Award was presented to MAmanda Steege during the $20,000 WEC Hunter Derby 3’6″-3’9″ for her classic style and her sportsmanship. The Style of Riding Award is generously donated by Bill Rube to be awarded to the rider who best displays the American Style of riding in the ring and sportsmanship outside of the competition arena. The recipient serves as a role model for preserving the integrity and tradition of equestrian sport. “This award is very special to me because the recipient of this award pays it forward both in and out of the show ring,” says Rube. Steege received an elegant leather duffel bag and wore a white rose corsage on her lapel throughout the handy round to signify her achievement.

The Shapley’s Champion Groom Award for the best turnout in the class was presented to Erica Mckeever, mother and groom for Baylee Mckeever and Salvatore who were the 12th place finishers in the $20,000 WEC Hunter Derby 3’6″-3’9″. Shapley’s is a proud sponsor of the World Equestrian Center and is thrilled provide an award each week of the Winter Spectacular to the groom of the best turned out horse. Mckeever received a Shapley’s Award Bucket for Salvatore’s stunning turnout.

The $15,000 WEC Derby 3′ Open started out the morning in Friday in Hunter 1 with 31 entries vying for the win. Ultimately, Hillary Johnson and Copper Fox, LLC’s Moonwalk (Quasimodo Z x Olavsca-F) topped the class with a pair of 90s scores. Johnson and Moonwalk wowed the judges in the first round, earning the highest first round score of 94. The duo returned for the handy round taking effortless inside turns to fences 2, 5, 7 and 9 along with all four high options. They were rewarded for their second elegant round with a score of 92, totaling 186 to win the class.

The $15,000 WEC Derby 3′ Non Pro took over Hunter 1 Friday afternoon with 41 entries. Like the professionals, several of the juniors and amateurs scored into the 90s, but it was Charles Casey and Alexa Kaas’ Charismatic (Chap x Hauptstutbuch) that topped the class. Casey and the stylish chestnut gelding navigated a flawless first round, taking all four high options for a score of 89. They returned for the handy round, taking tidy inside turns to fences 2, 5 and 7 along with all four high options. The duo was awarded a handy round score of 92, totaling 181 to win the class.

Saturday night featured the highly-anticipated WEC Premier Cup Equitation Final in the WEC Grand Arena. Fifty-nine talented junior riders were tested over a traditional three-phase Equitation format with jump heights set at 3’6″. Prizes included a shiny new 2021 Chevrolet Blazer to the winning rider and trainer bonuses totaling $100,000 to be awarded to the top three trainers along with one “wild card” trainer. Competition was tough with several highly decorated junior riders filling the order of go, but ultimately it was 2020 ASPCA Maclay Finals winner Dominic Gibbs aboard Mountain King Ranch LLC’s Cent 15 (Carenzo x Sarafina) that prevailed with two stunning rounds. Gibbs was presented with his 2021 Chevrolet Blazer while his trainer, Stacia Madden, took home the lionshare of $40,000 for the trainer bonus.

Saturday also featured the $7,500 Futures Prix 1.40m where Hugh Graham and his own Florino bested a field of 25 to win the class. The pair had a successful week at World Equestrian Center — Ocala, also taking a ribbon in the $1,000 1.30m Jumpers against 39 entries.

Sunday’s $75,000 WEC Grand Prix 1.50m saw a field of 37 entries. Eleven entries advanced to the jump-off with nine jumping double clear, while Kristen Vanderveen and Bull Run Jumpers Inc’s Bull Run’s Risen (Utopie x Violette) prevailed with a jump-off that proved unbeatable. The duo jumped a clear first round in 82.536 seconds. Vanderveen and her scopey bay gelding picked up pace in the jump-off, making up crucial seconds across the ground. The duo galloped through the timers at 39.892 seconds, moving into the top spot.

Elizabeth Rinehart and Susan Banks’ As You Wish (Long Deal x Idemara) took home the blue ribbon in the $2,500 Non Pro Hunter Derby 2’6″. The duo laid down two beautiful rounds to top the class and also earned ribbons in the Intermediate Children’s Hunter this week.