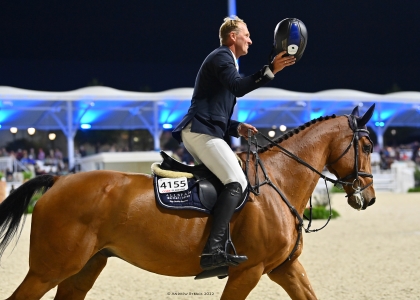 World Equestrian Center – Ocala would like to thank all exhibitors, sponsors , vendors and spectators for joining us during the 2022 Winter Spectacular Show Series. The final week of Winter Series was filled with thrilling competition including three $75,000 Hunter Derbies and the $200,000 MARS Equestrian Grand Prix. Olympic rider Andre Thieme captured the sweet victory in the $200,000 MARS Equestrian Grand Prix aboard Conacco.

Kimberley Bird and her own Cera Cassina were the only pair on Sunday to keep all the rails up on the short course for a well-deserved win in the $15,000 WEC Ocala 1.45m Jumper Class to close out the Winter Spectacular Show Series.

“I flew over on January 1 and have been here ever since. We aren’t ready to go home, that’s for sure,” said Bird. “This facility is unreal. Back at home I jumped around World Cups, but this place is an entire new level. We will be back for sure.”

“I have done two grands prix here this season with the same horse, knowing that I wanted to do this class. When I first showed him in this arena, he was very impressed by it all, so I knew what I was coming into tonight,” said Thieme. “I had the privilege of going to the Olympics this past year and I have to say, this is the only other place that I remember having a venue like the Olympics. The jumps, lights, décor and water features are all just so impressive. It is an incredible feeling to show here. I am beyond thrilled that my horse who is not that experienced yet, took it that well and did such an amazing job tonight.”

“I wanted to teach him to go a bit faster. I don’t believe he ever did much against the clock. I tried to go quick with him in Wellington once, but it didn’t go according to plan,” laughed Coyle. “Today, he felt very together and hopefully he will continue on this path.”

Rodrigo Pessoa (BRA) and Artemis Equestrian Farm LLC’s La Caramba snagged the blue at the end of the order in the $12,500 WEC Ocala 1.40m Jumper Classic.

“I was going into the class with one other horse in the jump-off where my time got beat. I was the last to go and had a good plan on what I wanted to do,” Pessoa said. “I was very quick from one to two. It was a long gallop, this mare does better when she gets into a rhythm, so it was an advantage for us. Then she was slick to the last two fences. I was very proud of her performance.”

“The atmosphere was incredible tonight, there was a lot to look at, but Attendu had his game face on. I really enjoyed the handy. The combinations were very testy, but this course offered a gallop to the last fence, which is personally my favorite.”

Jeff Gogul and Roaring Brook LLC’s No Doubt secured the highest overall score from the judges in the $75,000 WEC Ocala 3’ Open Hunter Derby.

“I was lower in the order, and Dorrie [Douglas] is a hungry and amazing competitor that throws it all out there, so I knew I had to give it my all. I thought about his strengths and weaknesses. I picked up a strong gallop right from the gate, which gave me a brilliant first jump, after that, I never took back and it just kept flowing.”

“The Open derby went earlier so I was able to watch the course. I knew the track that I wanted to take with all of the inside turns. He’s such a brave horse, I was able to angle the two-stride hay bale line to turn swiftly back to the next jump.”

“I thought the courses rode very nicely. It was good prep for Saturday and Centriko Volo is going to Miami after this show, so the waterfall was good prep,” laughed Coyle. “I didn’t think I went that fast, so I was pretty shocked I won because there were a lot of entries behind me. Daniel looked pretty fast in the jump-off, I thought he might have had my time.”

“Jim [The Chocolatier] is very new to me. This was our first derby together. I got him in late November, where my trainer, Ashley Blake Holsinger at Memory’s Hill Stables found him for me,” said Guinan. “I was so proud of The Chocolatier and I was proud of how I rode. It was my very first handy with him, so my goal was to have a smooth round. The rollbacks were nice and then he just walked down the lines. We ended up receiving an 86 in the first round and a 83 in the handy. I am still in shock that I won.”

Lexi Dodson of Mississauga, Ontario and her own Caleche hunted to first place in the $2,500 WEC Ocala Pony Hunter Derby on Friday in Hunter 3.