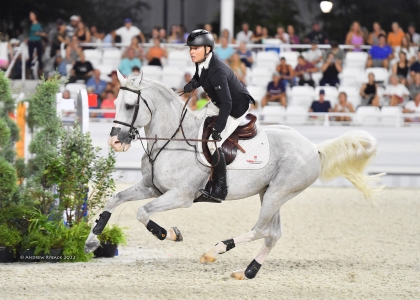 “The first course was challenging. There was a lot of good horses and riders here tonight, from Olympians to World Champions and only a handful made it clear,” said Wordley. “The yellow double combination was a bit tricky; it was either a flat five or a very short six off a wide oxer. On my first horse, Mick Jagger, I did five and on my other two I did the six, but a lot of riders struggled with that one.”

“I know she’s a naturally quite fast, so I used that to my advantage to put enough pressure on the rest of the class, but I do have a tendency of wanting to go a little too quick.”

“My business partner, Colin Savaira was my voice of reason. He told me that I should aim to have a smooth and consistent round. I don’t have to be the hero. So, I want to thank Colin for his intelligent words today. I couldn’t do any of this without him.”

Tracy Fenney made memories in the $10,000 WEC Ocala 3’ Open Hunter Derby aboard MTM In The Moment.

“We just imported him. His previous owners thought that he was going to be a big four or five star horse, but soon found out that he was just too quiet. So, that’s how I got him.”

Katalena Prusso secured first and second place in the $10,000 WEC Ocala 3’ Jr/Am Hunter Derby with scores in the 90s on both mounts.

Camelot is an amazing horse owned by Judy Kerr. He is so much fun to ride and really tries to win for you,” told Prusso. “Viscolano is my mom’s horse. He’s young and just starting to do the derbies. I went a bit wider in the handy with him, because I knew this was all still so new for him.”

“I try my best to not disturb her. She’s quick with her thoughts, careful and has very fast reflexes. I have to pause for a second and remind myself that she’s so naturally quick, I don’t ever have to rush.”

“My goal was to lay down a reasonable track that used Quadrant 3’s strengths. He has an enormous stride and the jump-off suit him. The way that the jump-off started, you could count from one to two, then leave out to three. The abstract turn to the oxer was off your eye, then had to do the five to the double. Everyone did the same thing after the double combination to the next fence, then to the last one, it was placed in the corner, where you could gallop, but I didn’t think that was the place to win the class.”

Victoria Alexandris of Dallas, Texas and her own Coolio 28 received a first round score of 81 and a handy score of 87 in the $2,000 WEC Ocala Pony/ Children’s Pony Hunter Derby for the blue ribbon.

Congratulations to all competitors on another successful week of equestrian sport!