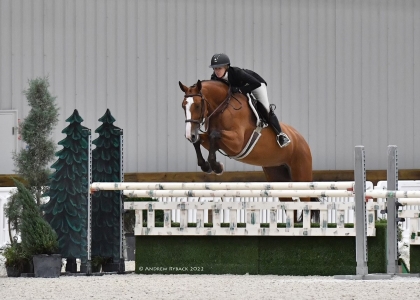 A slew of the country’s top hunter athletes took to the CaptiveOne Advisors Arena 1 this afternoon to vie for the top prize in the $12,500 WEC Ocala 3’6”-3’9” Hunter Derby. Ultimately it was Dorothy Douglas and Abigail Davenport’s MTM Lolah LOL (Los Angeles x Palma) that rose to the top of the leaderboard with two consistent scores.

Douglas and MTM Lolah LOL are back on their a-game after an injury, “This is Lolah’s second week back showing. In April, she suffered a pretty bad injury and we sent her to the Equine Performance Innovative Center (EPIC) in Ocala where she received Hyperbaric Oxygen Therapy. I wasn’t quite sure how long the recovery would take, but at that point I was just focused on making sure she was going to be okay. It was amazing how quickly she was able to heal.”

Back and ready to dominate, Douglas and the nine-year-old Westphalian mare laid down a beautiful first round for a score of 88.5.

“Last week, I was pretty tentative with her, making sure that she was ready to show and she proved that to me last week. Today, I felt like I was riding the horse that I had during Winter Series. I was able to just show up today, cold turkey and do the class. She loves her job and now she gets to go relax back at home,” Douglas said.

When it came time to return for the handy, Douglas made a tweak in her plan, “I saw Jake Evans do the inside left turn to fence one and Lolah does very well off the left lead, so I knew I was able to make that turn. For the remainder of the course I wanted to stay smooth, tidy and do a few different angles to show her off. Lolah loves a challenge and when she has a good one, that’s when she shines.”

Douglas and MTM Lolah LOL navigated the handy with aplomb for a consistent score of 88.5 and an overall total of 177 for the victory.

“Today, was a huge confidence boost and special win for Davenport Farm and MTM Farm. I want to thank Dr. Erik Perez and the owner of EPIC, Dr. Alberto Rullan for leading Lolah’s recovery. I wasn’t sure what was going to happen in April, but now I think we are right back on track. Now, we will do a few more derbies here, then go to Kentucky for the 2022 Hunter Derby Finals,” shared Douglas.

“Goldfish has had several months of light work because the amateur rider that leases him had knee surgery and I broke my leg, so he hasn’t been going too much. This was a test for me to get to know the horse. We couldn’t be happier with him, he was champion in the 3’ WEC Hunter division and he was amazing in the derby,” said French.

French and the stylish 12-year-old Warmblood gelding delivered an enviable first round, jumping all four high options for a score of 90.

French thought the course was good preparation for Kentucky, “It was a nice course, but ten stride lines are my nemesis. I usually don’t count in lines that long, but today I counted because I knew we are going to have the same types of lines in Kentucky. It was amazing practice for the horses and me.”

The pair returned to try their hand at Moore’s winding handy track, “Goldfish was really on it today. I was able to really gallop the hand gallop fence, which I think we got bonus points for and then he was perfect over the trot fence. He answered everything I asked from him, and he landed on every lead.”

French and Goldfish navigated the track finding the perfect distances to receive the class’s highest handy score of 93 for an overall total of 183.

French has enjoyed his first week at World Equestrian Center – Ocala, “This venue offers such a great experience for horses. We don’t really get to show in indoors like this too often. There are so many places to ride, warm-up and hack-out. The warm-up arenas are huge, the air-conditioning is refreshing then you can go outside on trail. They have really thought of everything.”

Thirty-four Jr/Am hunter riders competed for the blue ribbon in the $10,000 WEC Ocala 3’ Jr/Am Hunter Derby, but it was Isabel Harbour and IMH Equine, LLC’s Fitz (Numero Uno x Kootje) that captured the highest overall score from the judges.

Harbour and the 14-year-old Dutch Warmblood gelding have earned numerous top placings in the $15,000 WEC Ocala 3’ Jr/Am Hunter Derby during the 2022 Winter Spectacular Show Series. Today, the pair continued their success delivering a smooth first round while jumping all four high options with ease for a score of 83.

“Fitz has been amazing. He’s been champion almost every week in the Amateur Owner Hunter division,” said Harbour. “I really enjoyed the course today; it was different from any other course that we have done so far. Fitz was forward and was able to really open up his step.”

Harbour returned to the handy knowing she had a few points to make up, “I had to find something to be different and the inside turn to the trot fence sold it. Everywhere else I was tidy, and my hand gallop was good, Fitz is amazing at tests like that.”

The pair floated around the score to earn a high score of 89 for a two-round total of 172 for the win.

“This was a great way to end. I won’t show much for the rest of the year. All of my horses get a well-earned break. We will be back for the winter circuit because this is our favorite place to show. Everyone here is amazing and the venue is so incredible, we love it.”