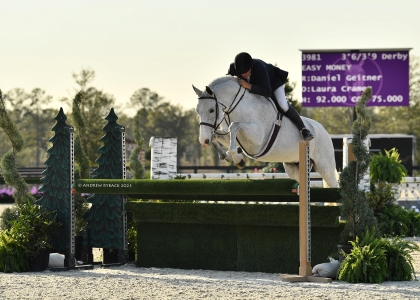 Geitner and the gorgeous 11-year-old Oldenburg gelding laid down a brilliant first round to secure a score of 82 from the judges.

“’Easy’ is an incredible horse. His owner Laura Cramer sends him to me in the winter and we usually keep him through the spring, then he will go back home to Upperville, Virginia with her in the summer. This is our second winter together, and he is a really fun horse to ride,” shared Geitner.

“He is enormous, with big scope and a huge step. He was second last week out in the Stadium. It’s pretty neat for a horse as tall and big as he is to go from the giant ring last week to come into a normal sized ring this week, and still be so rideable and handy. He’s kind of like a jumper, the more you power him up, the better he jumps.”

Geitner piloted three horses in the handy. He made a splash aboard Magnolia Lane Stables, LLC’s Coltrane earning a two-round total of 171 to also earn the third-place ribbon.

Geitner spoke about his plan for Easy Money after riding Coltrane in the handy, “I did a very tight inside turn from two to three on Coltrane, but it was very snug. I also did the inside turn after the trot fence back to the high option oxer, which was extremely tidy. I decided to focus on being smooth and make medium turns with Easy Money and not go too crazy. A few other riders had some mistakes here and there, so I decided to just put in another solid round.”

Geitner and Easy Money floated around the handy track, jumping all four high options is stellar form to find a high score of 90 for a two-round total of 172. Geitner was also awarded the prestigious ‘Style of Riding’ award presented by Bill Rube.

Steege and the 14-year-old Warmblood mare by Balougran Z found a seamless first round track for a score of 86.5.

Steege enjoyed today’s tracks, “I thought the course rode nicely. It ended up being a bit more challenging than I thought when I walked it, but it may just have been because the horses are just getting back into the swing of things.”

“I loved the new jumps that were out there today. The birch logs were beautiful, and I loved the tree standards in the double combination. I always love it when they pull out the stone wall fence. The courses here are always beautifully decorated,” said Steege.

Steege and Balou Velvet were sitting second when they returned for the handy, “It was a very fun handy. The course gave you the option of whether you wanted to really show off, or just stay out. Balou Velvet was really up for the challenge; I don’t know if I have ever ridden a horse as handy as her. You just look where you want to go and she’s already there.”

The pair pulled out all the stops for the handy, earning a 91 for an overall score of 177.5 for the win.

Balou Velvet’s owner Samantha Ruttura spoke about the incredible mare, “She has always been amazing. We have had her for about two or three years. I show her in the Adults, but I haven’t shown much this year. She is always very consistent and wants to do a good job for you.”

“She’s such a great mare. She really rose to the occasion today and knew she won in the end. I could barely get her to stand still when we were waiting to go in for the photo, but then she was super relaxed in the victory gallop, like she’s done it a million times,” joked Steege.

Steege also captured third place honors aboard Cara Garito’s Tangelina (Tangelo Van De Zuuthoeve x Lucienne). “I was also very pleased with Tangelina. She’s a Pre Green horse and this is her first derby. She is just learning the handies, so we opted to go around a few turns, but she jumped so well. I am very excited to watch her grow.”

Fifty-nine contenders took to Hunter 1 this afternoon to vie for the top prize in the $15,000 WEC Ocala ‘ Jr/Am Hunter Derby, but it was Lily Toensing of Reddick, Florida that captured the victory aboard her own Consanto (Collado x Camillo Queen).

Toensing and the seasoned 15-year-old Holsteiner gelding found a lovely rhythm in the first round to earn the second highest score of a 90.

Toensing expressed how well Consanto felt today, “He was incredible today. He felt super in the warmup and even better on course. We had a pretty straightforward plan for the first round. We decided to go with the bold numbers in the lines. We did the eight and then the nine. With the more open stride, we set the tone for the rest of the course. He was super and attentive the entire time.”

Toensing and Consanto were the second to last pair to attempt the handy track, “We did the bold number up the first line in the handy, we were a little between what to do, but after we saw a few others stay more direct, we stuck to it. We finished off the track strong with a nice roll back to the final fence. The goal was to go for the gold, and it ended up working out,” laughed Toensing.

The pair rolled around the handy track, jumping all four high options with ease to earn a score of 89 from the judges for a two-round total of 179 for the blue ribbon.

Before the start of the handy round in the $20,000 Golden Ocala Golf & Equestrian Club 3’6″-3’9″ Hunter Derby, the prestigious Style of Riding Award was presented to Daniel Geitner for his classic style and his sportsmanship. The Style of Riding Award is generously presented by Bill Rube to be awarded to the rider who best displays the American Style of riding in the ring and sportsmanship outside of the competition arena. The recipient serves as a role model for preserving the integrity and tradition of equestrian sport. “This award is very special to me because the recipient of this award pays it forward both in and out of the show ring,” says Rube. Geitner received an elegant duffel bag and wore a white rose corsage on his lapel throughout the handy round to signify his achievement.