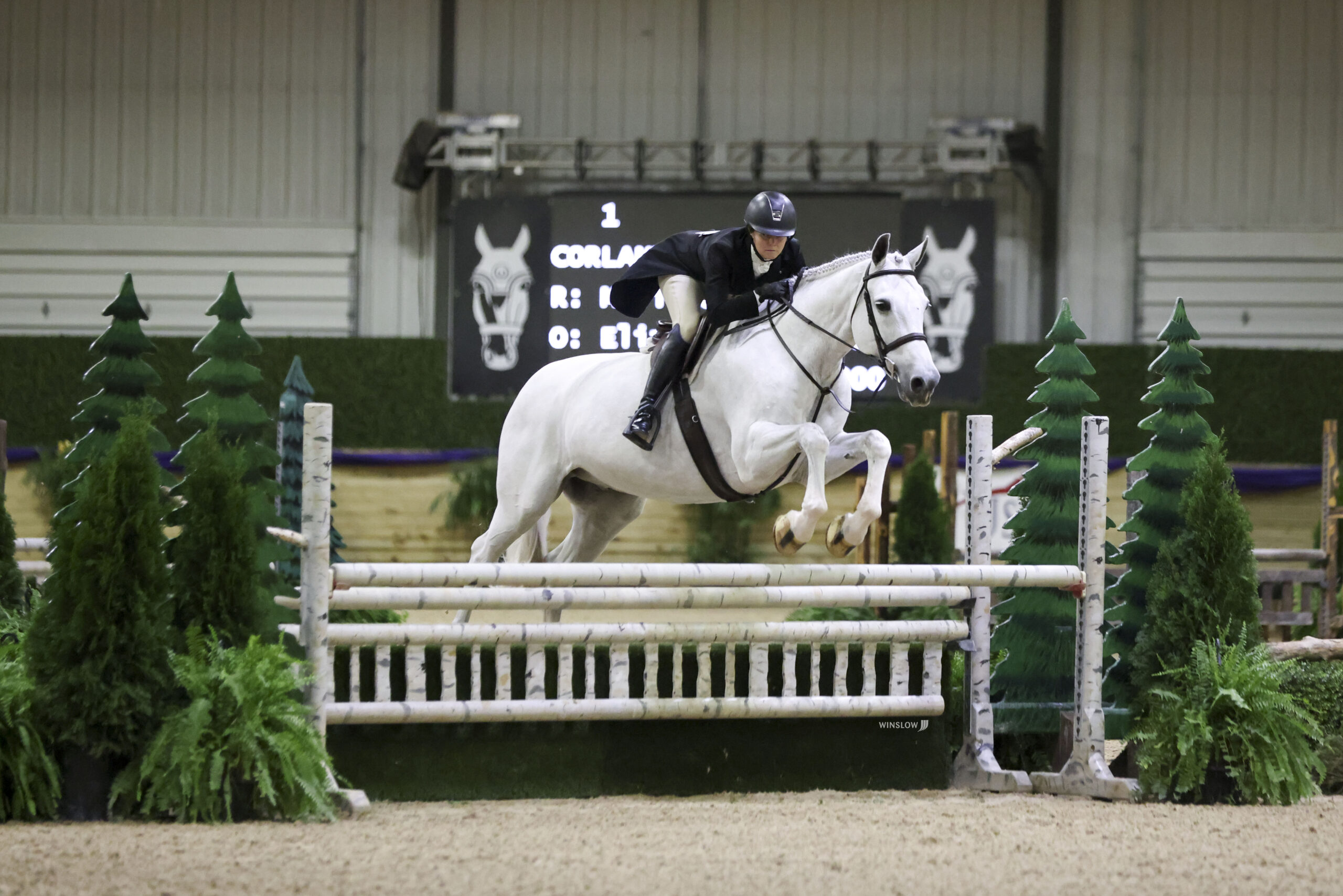 The $10,000 USHJA Hunter Derby 3′ Open saw twenty-one of the finest hunter teams take on Barton’s tracks, but it was Hunter Derby maestros Corlando 49 and Melissa Donnelly who achieved the highest scores from the panel of judges.

Corlando 49 (Cartani x Olanda I) and Donnelly led the class with scores of 88 and 85.5. The accomplished pair’s first-rate efforts earned a grand two-round total score of 173.5 points for the win.

Donnelly and her team have spent most of the Winter Classic series at World Equestrian Center, but took a short break to go home before this week’s show. “He has had the past couple of weeks off and he definitely appreciates it. He loves to be outside, be a horse and especially get dirty.”, Melissa mentioned.

Donnelly of Just A Folly Farm, in Oxford, Michigan has piloted snow-white sixteen-year-old Holsteiner gelding for many years and applauds his great effort each time they enter the ring.

We caught up with her ringside to chat about today’s winning rides. “He was really nice. He gave me a little bit of extra opinion in the second round. I was worried for a second that he didn’t want to play in the Derby today, but he came back to the party and gave me a great ride.”

Twenty-eight entries competed for the top spot during tonight’s $10,000 USHJA Hunter Derby 3′ Non Pro, but none could best California’s Skylar Wireman and MZ Farms LLC’s Bonne Starlight  (Bonne Chance x Lughana). The adored team was surely the crowd and judge’s favorite, with applauds booming after each round. They graced the field with elegance and found each jump perfectly.

We watched this spectacular team debut at WEC Wilmington during week 14 of the Winter Classic series where they rode to a reserve placing in the $10,000 USHJA Hunter Derby 3′ Non Pro.

“Bonne Starlight is a more green horse and has only been competing for under a year. Although he is on the greener side he has stepped up and is a pleasure to ride. This is his second indoor show and he is doing great! We showed in Las Vegas last year indoors and even though he is newer, he is performing at top-level.”, mentioned Wireman as she chatted with WEC ringside.

Wireman, the 2022 WEC Premier Equitation Cup Championship champion and the stylish 10-year-old Hanoverian gelding soared over each effort, capturing scores of 87.5 and 92, totaling a 179.5 score for first place honors.

Our dear friend and longtime WEC competitor, David Beisel, was involved in a devastating riding accident March 12. Join us next week for increased prize money and all $50,000 Grand Prix entry fees to be donated to David. More information here: