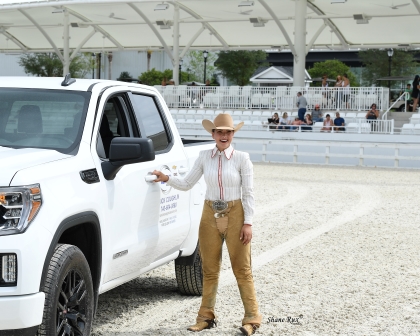 The first World Equestrian Center – Ocala 2021 Championship Show was a success, with exhibitors traveling from all over the country to compete. All the classes were filled with top equestrian competition and amazing prizes. The Championship Show gave out an array of prizes including a brand new $60,000 GMC Truck to the winner of the 15-18 Horsemanship Challenge that was won by Hanna Olaussen & Wearin Only Moonlite. Some other highlights from the show included the Western Pleasure and Hunter Under Saddle Finals where top competitors competed for the big trophy. The show also highlighted two Freestyle Reining classes that were held in the new western Arena 5 this past Friday and Saturday night.

The Win A Truck 15-18 Horsemanship Challenge saw a long list of youth exhibitors that tackled a very difficult horsemanship pattern to compete for the brand new 2021 GMC Truck. The competition begam on Friday, October 1 where the first go was held in the Grand Arena. The top 10 finalists from the first go qualified to compete in the finals on Sunday, October 3. On Saturday, riders that did not qualify had another chance to try and earn a top 10 finish so they could compete for the truck on Sunday.

On Sunday, October 3, 20 finalists gathered in the WEC Grand Arena to contest the difficult pattern, and ultimately it was Hanna Iselin Olaussen from San Antonio, Texas and her own Wearin Only Moonlite who prevailed to take home an abundance of prizes included the 2021 GMC Truck. Her trainer Brad Jewett was also awarded the winning trainer bonus of $5,000.

On the night of Friday, October 8, nine amazing horse and rider combinations took to the new western arena to contest the Non Pro Freestyle Reining class. Each competitor dressed up to match their song choice, there was a little mermaid, jail breaker, angel and grease lightning. Each competitor put on an amazing show, but it was Madison Hayden Rafacz and Shannon Rafacz’s Rio Good Shot that slid their way to the win.

Rafacz didn’t quite know what she was going to do for her Freestyle class for quite some time, “I just picked my Freestyle about a week ago. There was a lot of things that were up in the air, so I wasn’t sure what to do yet. Some things were planned during my Freestyle but I ended up going with what was at the top of my head because [Rio Good Shot] can lose focus sometimes. So, I went with what she was telling me she was able to do and it went really well.”

Rafacz was very happy with her round tonight, “This was actually my first Freestyle ever, so it feels amazing that I won. [Rio Good Shot] was amazing tonight and really enjoyed being out there. I loved the crowd, they were cheering and motivating us the entire round.”

Last night, the World Equestrian Center – Ocala hosted another thrilling night of competition as ten stunning horse and rider combinations took to the new western Arena 5 to contest the Open Freestyle Reining class. Each exhibitor dressed to match their song of choice. Tonight, we saw a variety of costumes such as a bride, lion, and an alien. Each pair delivered impeccable rounds that made the crowd go wild, but it was Pete Kyle from Amarillo, Texas and his own KR Smart Dreamer that danced their way to first place.

Kyle was specific with his maneuvers, “KR Smart Dreamer is only five years old but very broke. I tried to do the maneuvers to his strength then goof around with the crowd when I could. My favorite part about Freestyle is the engagement with the crowds. Having a large crowd is one of the big components in Freestyle reining and the crowd tonight was amazing. I was really impressed that there was a full house and they seemed to know what was good and bad based on their cheering,”

This was not Kyle’s first time winning a Freestyle, “I have been competing in Freestyles for a very long time. I think I won my first one in 95’ and I have been blessed enough to have won Freestyles from all over the country, but I have to admit this is the best facility I have ever been to. It is like Disney World but with horses,” expressed Kyle.

We would like to thank all the exhibitors, trainers, sponsors and vendors for coming to the first 2021 Championship Show. We are overwhelmed with the outstanding support that we have received from everyone and would like to congratulate all of the exhibitors on an amazing two weeks of equestrian sport.

Mark your calendars for the A Sudden Impulse NSBA and Futurity show held on April 20 – May 1, 2022. The show will feature more than $360,000 in CASH prize money along with a new bonus of $50,000 added for all Novice classes and walk trot classes. This added money will allow a missing sector of an industry to show for large purses and prizes that is normally not awarded. These Novice and Walk Jog classes will be open for exhibitors of all breeds. Stay tuned for more information coming soon.