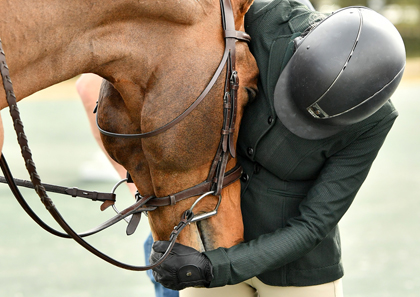 The World Equestrian Center — Ocala Winter Spectacular kicked off last week with a full slate of hunter and jumper competition along with eight exciting feature classes. Exhibitors and visitors enjoyed delicious breakfasts, lunches, dinners and snacks at our four on-site restaurants. Live music filled the Grand Plaza both Friday and Saturday evenings, adding to the excitement of the show. Feature classes ranged from 2’6″ derbies to a 1.50m grand prix, offering fun classes with prize money for exhibitors of every level.

Feature class action began on Thursday in the WEC Grand Arena with 26 entries in the $20,000 Welcome Prix 1.45m. Four entries managed double clear rounds, but it was Dorrie Douglas and MTM Farm’s MTM Chelsea 98 (Cristallo x Lacanau) that sped to the win. Douglas and the 11-year-old Westphalian mare took their time in the first round, jumping clear in 83.000 seconds, one second under the time allowed. The pair picked up the pace on the short course, mirroring Lambre’s inside track and blazing through the timers. They stopped the clock at 42.084 seconds, taking the win.

Friday saw three hunter derbies including the $20,000 WEC Hunter Derby 3’6″ – 3’9″, the $15,000 WEC Derby 3′ Open and the $15,000 WEC Derby 3′ Non Pro in the beautiful 5,000 seat stadium. William Coleman and Jill Grant’s Tropics (Diarado) nabbed the win in the $20,000 WEC Hunter Derby 3’6″ – 3’9″, taking to the course early in the order, setting the bar high by laying down a flawless course for a score of 91. Coleman and the 10-year-old Selle Francais gelding were last to return in the handy round and held nothing back, taking inside turns to fences 1, 2, 4, and 6. With an option to turn right or left to a final line after fence 6, the pair chose to turn left, demonstrating a brilliant effort over the final fence for a score of 93, brining their overall score to 184 for the win.

Twenty-seven entries filled the stadium for the $15,000 WEC Derby 3′ Open. Competition was close, but Melissa Donnelly claimed the win in the class aboard Elizabeth Becker’s Grand Tour. The pair navigated a lovely first round for a score of 88, then returned in the handy round to show off their skills. Donnelly and Grand Tour chose inside turns to fences 4, 5, 7 and 9, and crafted a beautiful rollback to the trot fence option. The pair were rewarded with a score of 89 in the handy round, brining their overall total score to 177 for the blue ribbon.

The $15,000 WEC Derby 3′ Non Pro saw 20 entries vying for the win. Several entries scored into the high 80s and low 90s, however none could beat Laura Cho and her own Westley (Clarimo x Unique VIII). Cho and her 10-year-old Holsteiner gelding were first in the order, setting a high standard with an impressive round and a score of 89. The duo returned near the end of the order for the handy round, displaying their handy abilities with inside tracks to fences 4, 5, 7, 8 and 9, and topped off their performance with an effortless, tidy rollback to the trot fence. Cho and Westley earned a second score of 89 for an overall total of 178 to top the class.

Saturday’s $75,000 WEC Grand Prix 1.50m saw an international field of 30 entries battling for the lion’s share of the prize money, a World Equestrian Center — Ocala scrim and a stunning trophy from the National Snaffle Bit Association (NSBA). Aaron Vale owned the class, claiming 1st and 2nd place aboard Thinkslikeahorse’s Elusive (Rodrigoo x Alouette) and Sleepy P Ranch LLC’s Major (Carmargue x Pinot), respectively. Vale piloted both horses through clear first rounds before returning for the jump-off. Vale and Elusive were first in the order, Vale and Elusive shooting into a full gallop between each fence. The pair flew through the timers, leaving all rails up in a time of 40.570 seconds, which would prove unbeatable. Vale then returned aboard Major, again taking to the course at full speed. The pair crossed the timers at 42.520 seconds, moving into 2nd place by two-hundredths of a second.

Saturday also saw 24 entries vying for the win in the $7,500 Futures Prix 1.40m. Ireland’s Christina Kelly and her own Kingdom (Lux Z) stole the win near the bottom of the order with an impossibly quick jump-off, besting 2nd place by more than three seconds. Kelly and the 13-year-old Irish Sport Horse Gelding navigated one of the quickest clear first rounds in 84.117 seconds, then continued straight to the jump-off. The pair chose the inside track and raced through the timers at 42.122 seconds to steal the win.

Bradley Federico and Hope Farm LLC’s Zamundo (Zambesi) took home the blue ribbon in the $2,500 Non Pro Hunter Derby 2’6″ out of 23 entries. The duo laid down two beautiful rounds to top the class.

Congratulations to all entries on a fantastic first week at World Equestrian Center — Ocala!