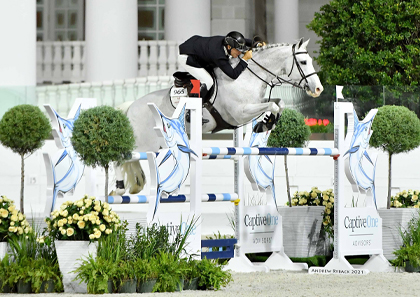 Feature class action kicked off on Thursday with 22 entries vying for the win in the $20,000 WEC Welcome Prix. Twelve entries advanced to the jump-off, but none could best Kady Abrahamson aand Banco Du Moulin (Popstar Lozonais x Gerboise Du Moulin), who topped the class for the second week in a row. Abrahamson and Banco Du Moulin, owned by Sharn Wordley, Steve Tinti and Sean Jobin, easily found a clear first round in 77.836 seconds before continuing straight to the lump-off. The pair opted for tight inside rollbacks to fences 14 and 11, and blazed through the timers at 33.635 seconds for the win.

Samantha Schaefer owned Derby Friday taking top honors in both the $20,000 WEC Hunter Derby 3’6″-3’9″ and the $15,000 WEC Derby 3′ Open. Scores in the $20,000 WEC Hunter Derby 3’6″-3’9″ soared into the high 80s and low 90s, but none could best Samantha Schaefer and Madeline Schaefer’s In The Know (Arkansas x Cavelle), who notched their third victory in the class this circuit. The unstoppable duo navigated a foot-perfect first round with all four high options for a score of 89, then returned last in the handy round, laying down a second flawless course for a score of 91, totaling 180 for the blue ribbon.

Schaefer also found success in the $15,000 WEC Derby 3′ Open aboard Ava Berman’s Emilio (Embassy I x Pirouette). The pair earned the highest score of the first round, finding each fence perfectly in stride and jumping all four high options for a score of 94. They returned for the handy round, flowing seamlessly through several tidy inside turns. They were rewarded for their efforts with a second score of 94, totaling 188 for 1st place.

Derby Friday also hosted the $15,000 WEC Derby 3′ Non Pro where Christine Campbell and her own Stallone (Silver Train x Mickey’s Gal) bested a field of 34 entries to earn their first-ever derby win. The pair navigated a spectacular first round, choosing all four high options for a score of 85. They returned for the handy round with the same finesse from the first round, opting for several inside turns, along with all four high options. The duo earned a handy round score of 86, totaling 171 for the win.

The $15,000 WEC Derby 3′ Non Pro also featured two special awards: the Style of Riding Award and the Shapley’s Champion Groom Award. Before the start of the handy round in the $15,000 WEC Derby 3′ Open, the prestigious Style of Riding Award was presented to Samantha Ruttura for her classic style and her sportsmanship. The Style of Riding Award is generously donated by Bill Rube to be awarded to the rider who best displays the American Style of riding in the ring and sportsmanship outside of the competition arena. Ruttura received an elegant leather duffel bag and wore a white rose corsage on her lapel throughout the handy round to signify her achievement.

The Shapley’s Champion Groom Award for the best turnout in the class was presented to the groom of 7th place finisher in the $15,000 WEC Derby 3′ Non Pro, Quoted (Quidam De Revel x Unoria). Shapley’s is a proud sponsor of the World Equestrian Center and is thrilled provide an award each week of the Winter Spectacular to the groom of the best turned out horse. Quoted’s groom received a Shapley’s Award Bucket for the gelding’s stunning turnout.

Saturday’s $75,000 CaptiveOne Advisors Grand Prix under the lights in the WEC Grand Arena saw 33 entries with a competitive field of 13 advancing to the jump-off, but it was New Zealand’s Sharn Wordley and his own Gatsby (Simba x Daisy Cruise) that stole the win. The pair laid down one of the fastest clear first rounds of the class in 68.703 seconds, signaling that they would be strong competitors in the jump-off. They returned near the end of the order with two quick, clear rounds from Santiago Lambre already on the board, but the pair were on fire, soaring over the final fence and through the timers at 42.766 seconds, just ahead of Lambre, to ultimately win the class.

Saturday also saw a second win for 13-year-old Izzy Beisel in the $7,500 Futures Prix aboard David Beisel’s Ammeretto (Numero Uno x Ranna). Izzy Beisel took to the course immediately after her father, David Beisel, delivered a quick, clear jump-off, so she knew she had to give the course her all for a shot at the win. The duo flew through the first round in 78.735 seconds, jumping clear and advancing straight to the jump-off. She urged Ammeretto forward throughout the course and the stands erupted in applause as she crossed the timers at 30.590 seconds with all rails up, a full second ahead of her father for 1st place.