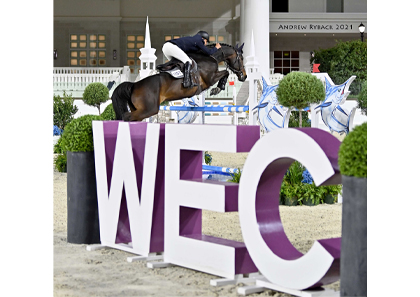 Thursday’s $20,000 WEC Welcome Prix saw an international field of riders representing 8 countries. Ten entries jumped double clear, but none could best amateur Jordan Petersen of High Springs, Florida, and Derek Petersen’s Diamant’s Legacy (Diamant de Semilly x Courtney Love II), who claimed their second $20,000 Welcome Prix win of the season. The pair delivered one of the fastest clear first rounds of the class in 73.644 seconds before continuing straight to the jump-off. They laid down a second clear round in a speedy 34.164 seconds, moving to the top of the leaderboard and ultimately winning the class.

Derby Friday took over the World Equestrian Center Stadium again this week with nearly 100 entries competing in the $20,000 WEC Hunter Derby 3’6″-3’9″, $15,000 WEC Derby 3′ Open and $15,000 WEC Derby 3′ Non Pro. The $20,000 WEC Hunter Derby 3’6″-3’9″ saw an exciting victory for Jeffrey Ayers and his own Cartel who wowed the judges for top honors in the class. The pair laid down a stellar first round, taking all four high options for a score of 94. They returned last in the order for the handy round, earning a score of 91.5 for their stylish performance, and a combined 185.5 to win the class.

The $20,000 WEC Hunter Derby 3’6″-3’9″ also featured two special awards: the Style of Riding Award and the Shapley’s Champion Groom Award. Before the start of the handy round in the $20,000 WEC Hunter Derby 3’6″-3’9″, the prestigious Style of Riding Award was presented to Josh Dolan for his classic style and his sportsmanship. The Style of Riding Award is generously donated by Bill Rube to be awarded to the rider who best displays the American Style of riding in the ring and sportsmanship outside of the competition arena. Dolan received an elegant leather duffel bag and wore a white rose corsage on his lapel throughout the handy round to signify his achievement.

The Shapley’s Champion Groom Award for the best turnout in the class was presented to Sergio Martinez and Gina Virga, grooms of 6th place finisher in the $20,000 WEC Hunter Derby 3’6″-3’9″, Caspari (Eurocommerce Berlin x Lady-Desi). Shapley’s is a proud sponsor of the World Equestrian Center and is thrilled provide an award each week of the Winter Spectacular to the groom of the best turned out horse. Martinez and Virga received a Shapley’s Award Bucket for the gelding’s stunning turnout.

Thirty-nine entries filled the Stadium for the $15,000 WEC Derby 3′ Open. The handy round saw fierce competition with a cut-off score of 87.5, but none could best Tracy Fenney and MTM Farm’s MTM Animated (Swarovski x Kirunett). The pair earned a score of 94 over the first course, the highest score of the first round. They returned last in the order for the handy round, earning a score of 93, totaling 187 and landing them in 1st place.

Saturday evening’s $75,000 Agricon Kubota Superstore Grand Prix hosted 44 entries under the lights in the WEC Grand Arena. Nine countries were represented in the class with several Olympians in the order of go. Seven entries advanced to the jump-off, but it was Mexico’s Santiago Lambre and his own Dingeman (Nintender x Jolanels) that stole the win. The pair delivered a clear first round in 78.743 seconds, conserving plenty of energy for their return on the short course. Lambre and Dingeman returned last in the jump-off,  then kept their pace throughout the course, only slowing down to ensure tidy rollback turns. The crowd exploded as the pair raced through the timers with a clear round in 36.850 seconds and into the win.

Thirty-one entries challenged a technical track in Saturday morning’s $7,500 Futures Prix. Just three entries managed to jump double clear, but it was five-time Olympian Manuel Torres and Fox View Farm’s Caillou VL (Cellestial x Laudatia) that nabbed the win. The pair delivered a clear first round in 78.186 seconds, then advanced straight to the jump-off. They galloped through the timers at 42.572 seconds with all rails up, moving to the top of the leaderboard and ultimately taking 1st place.

Victoria Raleigh and her own The One You Love took home the blue ribbon in the $2,500 Non Pro Hunter Derby 2’6″. The duo also earned top ribbons in the NSBA Hunters 2’6″ and Intermediate Children’s Hunters.