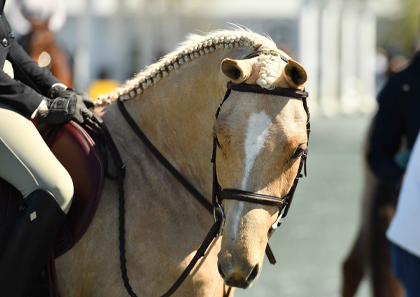 Week 7 of the World Equestrian Center — Ocala Winter Spectacular brought plenty of thrilling equestrian sport with exciting wins in both the hunter and jumper rings. The highlight of the week was Saturday’s $75,000 WEC Grand Prix 1.50m. The jump-off was a true head-to-head race between the top three entries, with placings ultimately separated by just one second. The excitement spanned the entire week with feature classes taking place each day.

Thursday’s $20,000 Welcome Prix 1.45m saw a field of 37 international entries. Ten entries advanced to the jump-off with just four jumping double clear, but it was Kristen Vanderveen and Bull Run Jumpers Six LLC’s Bull Run’s Divine Fortune (Padinus x Amhilavsca Fortuna) that took home the blue ribbon, notching their second $20,000 Welcome Prix 1.45m win of the season. The pair delivered the fastest clear first round of the class in 70.608 seconds, well within the time allowed of 76 seconds, then continued straight to the jump-off. They stopped the clock with a second clear round at 40.630 seconds, which would prove unbeatable for the remainder of the class.

Schatt and Ainsley Sadlo’s Kesh (Kalaslesa De Semily) that prevailed in the $15,000 WEC Derby 3′ Open. The pair had previously taken 2nd place in the derby and returned to the Stadium on Friday to earn a score of 93, the highest first round score of the class. The duo returned for the handy round, navigating a second foot-perfect round with tidy inside turns to fences 2, 3, 5, 6, 8 and 9 and all four high options. They were rewarded with a score of 95 for their efforts, bringing their overall total to 188 for 1st place.

Derby Friday also hosted the $15,000 WEC Derby 3′ Non Pro where Addy Wingate and Heather Wingate’s Monogram (Silvio) topped the class. The pair opted for all four high options in the first round, earning a score of 89. They returned in the handy round taking inside turns to fences 2, 3, 5, 6 and 9, along with all four high options, for a score of 88, bringing their overall total to 177 for the blue ribbon.

The prestigious Style of Riding Award was presented to Paige Beisel during the $15,000 WEC Derby 3′ Non Pro for her classic style and her sportsmanship. The Style of Riding Award is generously donated by Bill Rube to be awarded to the rider who best displays the American Style of riding in the ring and sportsmanship outside of the competition arena. The recipient serves as a role model for preserving the integrity and tradition of equestrian sport. “This award is very special to me because the recipient of this award pays it forward both in and out of the show ring,” says Rube. Beisel received an elegant leather duffel bag and wore a white rose corsage on her lapel throughout the handy round to signify her achievement.

The Shapley’s Champion Groom Award for the best turnout in the class was presented to Gerardo, groom of 1st place finisher in the $15,000 WEC Derby 3′ Non Pro, Monogram. Shapley’s is a proud sponsor of the World Equestrian Center and is thrilled provide an award each week of the Winter Spectacular to the groom of the best turned out horse. Gerardo received a Shapley’s Award Bucket for Monogram’s stunning turnout.

Saturday’s $75,000 WEC Grand Prix 1.50m under the lights in the WEC Grand Arena saw an international field of 42 entries. Kristen Vanderveen prevailed for the second consecutive week, this time aboard Bull Run Jumpers Six LLC’s Bull Run’s Prince Of Peace (Cardenio x P-Comtesse). In the first round, Vanderveen and the 12-year-old Holsteiner gelding jumped clear first round in 72.661 seconds. The duo returned at the end of an intense jump-off. With three quick, clear rounds already on the board, Vanderveen and her fiery gelding blazed through the first eight fences without touching a rail, then galloped to the final fence with the crowd urging them forward. The stands erupted in applause as the pair flew over the final oxer and through the timers in 40.635 seconds to win the class.

The WEC Grand Arena also hosted 46 entries in Saturday’s $7,500 Futures Prix 1.40m. Five entries managed double clear rounds, but it was Shannon Sullivan and her own Downtown’s Main Event that topped the class by two seconds in the jump-off. The duo was quick and clear in the first round in 69.033 seconds. They continued straight to the jump-off, hugging the inside track and flying through the timers at 38.249 seconds, moving to the top of the leaderboard and ultimately taking home the blue ribbon.

Mackenzie McGehee and her own Renoir (Carolus I x Erle VII) took home the blue ribbon in the $2,500 Non Pro Hunter Derby 2’6″. The duo laid down two beautiful rounds to top the class.