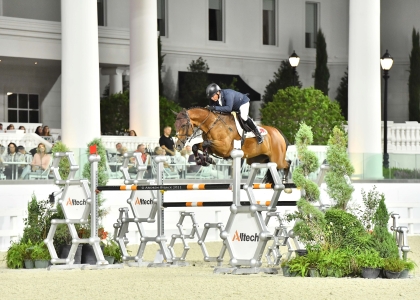 World renowned course designer, Guilherme Jorge (BRA) set the intricate track for the 53 starters. The course proved to be challenging and only nine managed to stay within the time allowed and keep all rails up. Of the nine, five were able to yield a double clean effort.

Olympian Santiago Lambre (BRA) and his own Pampero (Chacco-blue x Naloutaire) were the first pair down the ramp to attempt Jorge’s short track. Lambre and the speedy 12-year-old Oldenburg gelding flew around the track in 40.122 seconds which ultimately secured the pair the third place spot on the leaderboard.

Sharn Wordley and Mick Jagger followed the leading pair, but fell victim to one rail down. William Simpson and Tom Foley also had an unfortunate rail.

Hector Florentino (DOM) and Wyndmont Inc.’s ABC Quantum Cruise (O.B.O.S Quality 004 x Ardnehue Diamond Cruiser) entered down the ramp with the hopes of finding a clean round. Florentino and the 13-year-old Irish Sport Horse gelding raced around the jump-off track, leaving all rails up to stop the clock at 39.481 seconds to snag the lead.

However, the pair were soon replaced atop the leaderboard when Todd Minikus and Amex Z entered the arena.

“Amex Z has been a great partner for a long time. She was really on the job tonight. She has been knocking on the door for a few weeks now, and tonight she went in with her head on her shoulders,” said Minikus.

“Right off the bat, it was an extremely fast jump-off. It was such a wide-open course, there weren’t any options, but to be as fast as possible. It was step on the gas pedal and tap the brakes only once or twice type of track. Then for the rest, you just have to see what happens.”

Minikus and Amex Z started on a strong gallop to fence one, “She has an enormous stride, it’s deceitful at times. After the combination she was able to get down in seven quite nice. I ended up getting a little stuck in the turn back to the blue vertical, but I think I made up for that earlier in the course from one to two, then over to three. I slowed down right before the last jump, so we didn’t have it down.”

The speedy pair flew through the timers stopping the clock at an unbeatable 38.014 seconds.

“We have been here for seven weeks and have been knocking on the door. It just happens to be that I needed to save the win for the final grand prix of the series,” laughed Minikus.

Minikus spoke about his time at World Equestrian Center – Ocala, “We have had such a great time here. The Roberts have built such an incredible facility and everyone here; Vinnie Card, the show office, in-gates are just as wonderful. We will definitely be back.”

World Equestrian Center – Ocala’s Director of Operations, Vinnie Card spoke about the pinnacle event, “Tonight was a great way to close out the 2022 Summer Series. We want to thank everyone that came out to support us. We hope to see you all again soon for the Fall Show Series and 12-week Winter Spectacular in 2023.”

An additional $5,000 was awarded to the fastest four-faulter of the $100,000 Alltech National Grand Prix. Jad Dana and Spinghill Farm 1850, LLC’s After Eight secured the award with a very quick time of 72.459 seconds with one rail down.

Scott Keach received the ‘Luck of the Draw’ award.