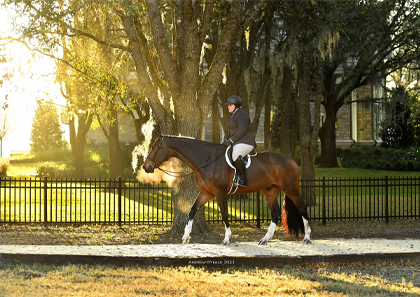 Week 5 of the World Equestrian Center — Ocala Winter Spectacular concluded on Sunday, wrapping up another fantastic week of horse showing. We saw exciting wins for amateurs and professionals alike, with feature classes spanning from a 2’6″ hunter derby to a 1.50m grand prix.

World Equestrian Center — Ocala Winter Spectacular Week 5 kicked off on Thursday with the $20,000 Welcome Prix 1.45m. Twenty six entries took to the course and just two entries managed double clear rounds, but it was Kristen Vanderveen and Bull Run Jumpers Six LLC’s Bull Run’s Divine Fortune (Padinus x Amhilavsca Fortuna) that snatched the win with an impossibly fast, clear jump-off. The pair managed the fastest first round of the class in 72.553 seconds. Vanderveen and the fiery mare advanced straight to the jump-off, choosing the inside track to the combination and taking a gamble by leaving a stride out between fences 9 and 10. Their efforts paid off as the pair crossed the timers at an impressive 38.982 seconds to ultimately win the class.

Derby Friday changed locations to Hunter 1 this week. The $20,000 WEC Hunter Derby 3’6″-3’9″ saw 20 entries try their hand at the inviting derby course. Several entries scored into the high 80s, but just one managed a score in the 90s: David Jennings and Allison Ventura’s Jordantinus (Air Jordan x O.B.O.S. Flower). The pair laid down a stunning first round, taking all four high options for a score of 86. Jennings and the handsome bay gelding upped the ante in the handy round, effortlessly taking inside turns that no other entries attempted. Their efforts paid off as they were rewarded with a score of 93, totaling 179 for the win.

Sally Stith-Burdette, Director of Marketing for Shapley’s, was on hand to present The Shapley’s Champion Groom Award to Eduardo Gonzalez, groom of the 1st place finisher in the $20,000 WEC Hunter Derby 3’6″-3’9″, Jordantinus, for the best turnout in the class. Shapley’s is a proud sponsor of the World Equestrian Center and is thrilled provide an award each week of the Winter Spectacular to the groom of the best turned out horse. Gonzalez received a Shapley’s Award Bucket for Jordantinus’ stunning turnout.

The prestigious Style of Riding Award was presented to Melissa Donnelly during the $20,000 WEC Hunter Derby 3’6″-3’9″ for her classic style and her sportsmanship. The Style of Riding Award is generously donated by Bill Rube to be awarded to the rider who best displays the American Style of riding in the ring and sportsmanship outside of the competition arena. The recipient serves as a role model for preserving the integrity and tradition of equestrian sport. “This award is very special to me because the recipient of this award pays it forward both in and out of the show ring,” says Rube. Donnelly received an elegant leather duffel bag and wore a white rose corsage on her lapel throughout the handy round to signify her achievement.

The $15,000 WEC Derby 3′ Open welcomed 28 entries as they vied for the win. Competition was tough with scores ranging into the low 90s, but it was Dorrie Douglas and MTM Farm’s MTM Dashing (Cascadello II x Jubilate) that nabbed the win. The duo flowed effortlessly through the first round, choosing to take 3 high options and earning a score of 83. Douglas and the stylish gelding returned for the handy round, navigating a second impressive round, taking 3 high options and opting for a tidy inside turn to fence 7. They were rewarded for their efforts with a score of 91, bringing their total score to 174 to take the blue.

Thirty-four entries took to the course in the $15,000 WEC Derby 3′ Non Pro. Christopher Coberley took 1st and 3rd place aboard Havens Schatt’s Actender PS (Action Breaker x Conpila) and David Glefke’s Undercover (Untouched x Tosca), respectively. Coberley and Actender PS earned scores of 92 and 93 to win the class, while he and Undercover scored a pair of 86s for 3rd place.

Saturday’s $75,000 WEC Grand Prix 1.50m saw a hyper-competitive international field of 33 entries with nine countries represented. Just four entries advanced to the jump-off, but it was amateur Kady Abrahamson and Abrahamson Equestrian’s Any (Aljano x Nina XI) that nabbed the win. Abrahamson and the fiery bay mare nailed a clear first round in 77.205 seconds before returning for the jump-off. On the short course, Abrahamson and Any flew through the track, crossing the timers with all rails up at 40.274 seconds to ultimately take the win.

The $7,500 Futures Prix 1.40m saw 31 entries with seven double clear, but it was Christina Kelly and her own Kingdom (Lux Z) that notched their second Futures Prix win of the season. The duo navigated a clear first round in 84.082 seconds, then advanced straight to the jump-off. Rather than taking the inside turn to the combination, Kelly opted to stay out, but gallop down the first and last line, leaving a stride out in each to make up time. Their efforts paid off as Kelly and Kingdom stopped the clock with a second clear round in 41.361 seconds for the blue ribbon.